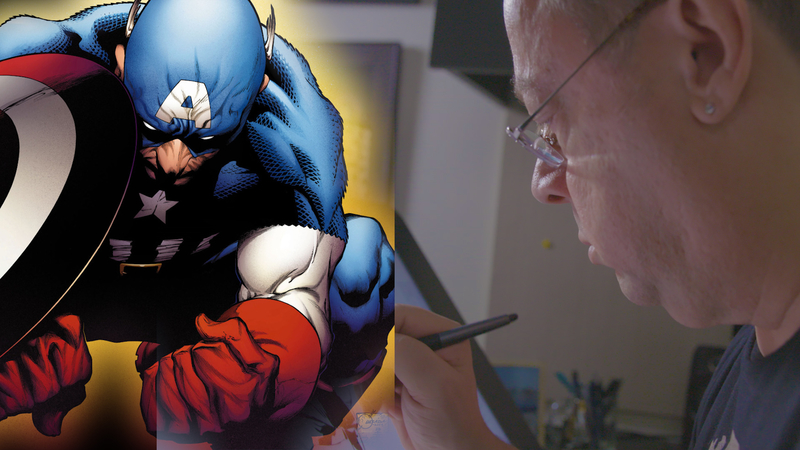 NEW YORK (WABC) -- In front of Iron Man's helmet and Thor's hammer, a mere arm's reach from Captain America's shield sits the man who has spent decades guiding the fates of our favorite superheroes on TV, in movie theaters and in comic books.

"I get paid to do what I used to get yelled at in elementary school for doing," said Joe Quesada, Marvel Entertainment's chief creative officer. "Looking out the window, daydreaming, making stuff up and doodling in my book."

Quesada has undertaken a hero's journey of his own, starting as a first-generation Cuban-American born in Queens who has become a prolific and legendary comic book artist shepherding the mega-popular financial behemoth that is the Marvel Cinematic Universe.

"I overlook all the creative aspects of the company and make sure that we're telling stories that are truly within the Marvel DNA," he said.

Quesada's ascension to the pinnacle of American comic storytelling was anything but a sure thing, as his family dealt with the struggles many immigrants, particularly Cubans, faced when coming to the U.S.

"My family came long before the Cuban revolution," Quesada said, recounting how his grandfather settled in the Bronx before moving to Jackson Heights and sending for his children to join him. "The Communist Revolution hung a heavy cloud over everything because so many of our relatives could not get to us at that time."

Despite the disconnection from his homeland, Quesada found kinship in the diverse friends from his neighborhood.

"You had Tony from Italy, and Ruben from Colombia, and Winston, whose family came from China," Quesada said, rattling off the names and nationalities of a dozen stickball buddies from Jackson Heights. "We were all first-generation. Growing up in that environment, you sit there and you go, that's what the world's like, right?"

Though his early worldview helped place him on the path to success, Quesada would not be where he is today were it not for the encouragement of his father, Jose Quesada, a voracious reader and supporter of the arts who helped build Shea Stadium.

"That immigrant dream, it was always a lawyer, be a doctor, be an accountant," Quesada said. "But my dad wasn't like that. He could literally see I had artistic talent, and I can remember from my youngest days him telling me, 'Be an artist.'"

Quesada vividly recalls the day comics entered his life. When he was 7, Marvel's Stan Lee released an issue of Spider-Man that grappled with the issue of drug addiction. Since the Comics Code Authority would not sanction the story for kids, Lee self-financed the issue.

"This was huge news," Quesada said.

Huge enough news that it landed on his dad's radar.

Quesada admits the local connection to Spider-Man may have played a role in his new obsession.

"Peter Parker lived in Forest Hills," he said. "I lived in Jackson Heights. I could ride my three-speed to Peter Parker's house. Of course, I knew he didn't exist. But I also kinda knew that maybe he did."

Quesada majored in illustration at the School of Visual Arts and a few years after graduation was hired by DC Comics. Over the next eight years, he drew and wrote prolifically, publishing work for Valiant Comics before forming his own publishing company, Event Comics, with partner Jimmy Palmiotti.

At Event, Quesada created the character Ash, a firefighter with superpowers. That boosted Quesada's profile as a writer and artist. In 1998, he was hired to work exclusively for Marvel, and by 2000, he was named the first Hispanic editor-in-chief in the company's history.

Now, chief creative officer, Quesada sees the connection between the inclusive band of heroes that have stepped into Marvel's spotlight and his own upbringing.

"It's the beauty of Marvel, which is when we are at our best, we reflect the world outside of our window," Quesada said. "Everything I needed to know to have a leadership role here at Marvel all happened on 95th Street between 37th and Roosevelt avenues in Jackson Heights where I grew up."

As Marvel enters Phase 4 in the theaters and on Disney+, Quesada, too, is entering a new phase of his career. Last month, he released "The Marvel Art of Joe Quesada - Expanded Edition," a memoir filled with dozens of sketches from Joe's decades-long career. Highlights from the book will be on display at The Society of Illustrators from Oct. 15 to Nov. 23. You can see Quesada there in person Nov. 5 when he will host a talk at the exhibit.

Despite the journey from Jackson Heights to Asgard, Quesada still hasn't forgotten his roots. A few years ago, he had the chance to fulfill a lifelong dream: visiting Cuba to see the family from whom he's been separated for decades.

"I get to meet my family and there, standing before me, are these beautiful women that all, every single one of them, look like my mother, who passed away many years before," he said.

Taking a moment, Quesada continued: "It was a gut punch, but boy it was so amazing to get to know them, to get to meet some of my first cousins and their kids. It was a great feeling to know that, even though we're far away, there's family of mine out there."

"Whatever way it is that you deem to be a success, family is such a strong motivator," Quesada said. "It's all about family."