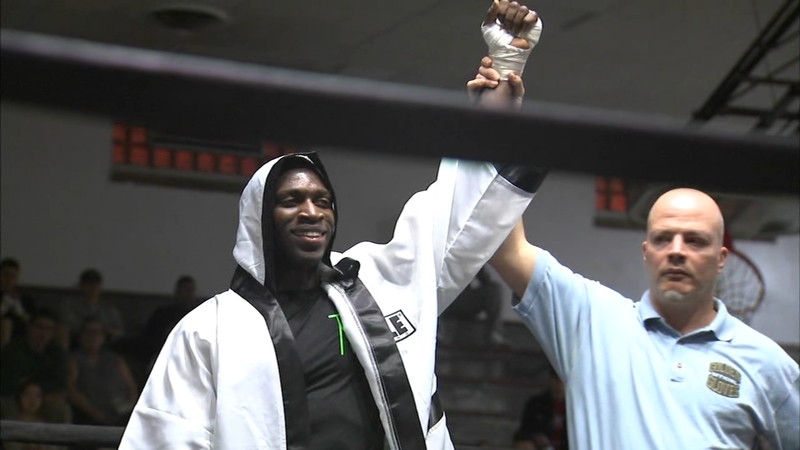 CHICAGO -- The two brothers at the center of the Jussie Smollett case spoke to ABC7 Eyewitness News Thursday night as one of them took part in a Gold Glove boxing match in Chicago.

The Osundairo brothers told police that Smollett paid them to help to stage his attack back in January.

For the Osundairos, the last few weeks have been a whirlwind. After entering the legal arena, one of the brothers tonight stepped into the boxing ring.

Abel Osundairo arrived at the match in a robe emblazoned with the American flag, and dropped his opponent in round one.

The public knows the Osundairo brothers are fit, and had done personal training for Smollett in the past, but Abel is also apparently a pretty good boxer. He advanced to the semi-finals of the Chicago Golden Gloves amateur tournament.

"He's got a right hand that puts most guys down," said Sam Colonna, Chicago Golden Gloves Board Member. "He's moves, kind of like an Ali type, kind of jabs and moves around very well."

The Osundairos were captured on surveillance video buying materials police say were used in the alleged staged attack on Smollett.

Smollett faces 16 felony counts of disorderly conduct for allegedly filing a false police report. He claims he was the victim of a vicious hate crime in the Streeterville neighborhood back in January, but police say it was a hoax and that Smollett hired the Osundairo brothers to carry out the fake attack. He has pleaded not guilty to all charges.

Before the match had nothing to say about the Smollett case, and would barely talk boxing.

Abel said he felt good about the night's fight, and Ola said his brother, as a boxer, is "great. He's wonderful." Ola was not at the match to box, but instead just to support his brother.

Police say Smollett's facial injuries were not from the siblings but were instead allegedly self-inflicted. But there was no sign Abel was pulling his punches Thursday night. He won by unanimous decision.