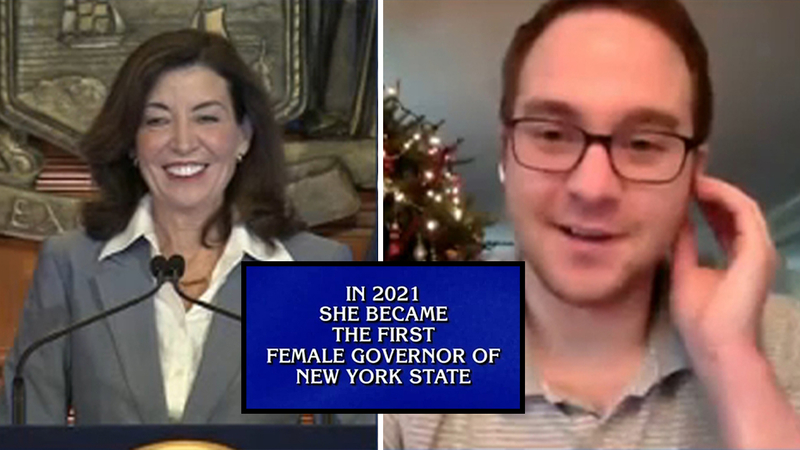 NEW YORK (WABC) -- Governor Kathy Hochul gave a "Jeopardy!" contestant from Brooklyn a second chance after he and his fellow contestants bombed on a question about her.

Contestant Joanna Wu couldn't ask the right question, nor could reigning champion Amy Schneider. However, contestant Ben Walthall of Brooklyn also did not get it right.

Hochul gave Walthall a chance for redemption during her press conference on New Year's Eve.

Funny enough, as the question was read for Walthall a second time, the reader incorrectly called Hochul the first female president before correcting himself.

"There you go, Ben! Thanks! Well played!" Hochul said.

Walthall explained that he sat out on the question because the episode filmed a couple of months ago, right as she took office. He has lived in New York for 11 years, but is originally from Massachusetts. He admitted he was a Patriots fan and Hochul, a Buffalo Bills fan joked, "Those are fighting words, Ben. Did we screen this guy?"

He went on to say that his girlfriend is a teacher at PS 58 in Brooklyn and he is grateful to the governor for her efforts to see that all kids ages 5-11 get their COVID vaccinations.

"We are very proud to see a fellow New Yorker up there and don't worry about this question, I don't have a long memory, so we're good," Hochul said of Walthall's time on the 'Jeopardy!"