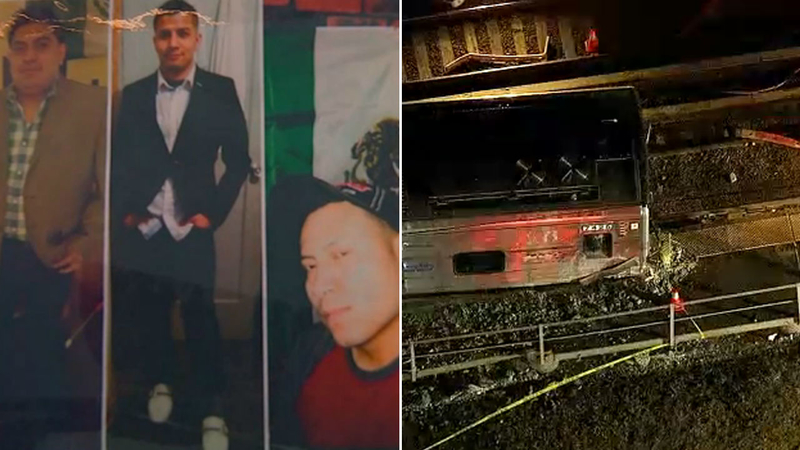 Investigation into LIRR collision that killed 3 in Westbury

WESTBURY, Long Island (WABC) -- A witness told police that the driver who caused a deadly crash by trying to go around a lowered railroad gate on Long Island was fleeing the scene of an earlier crash, a police official said.

Three men were killed when two Long Island Rail Road trains going in opposite directions struck the vehicle as it was on the tracks Tuesday evening.

Authorities say the deadly crash was caused when the driver of the car bypassed lowered crossing gates and drove onto the tracks at the School Street crossing.

Police say an eastbound train that had just pulled away from the Westbury station struck the car at 7:20 p.m. The car was then struck again by a faster-moving westbound train.

A witness said the gates were down with lights flashing at the time, and the driver went around them. That same witness reported that the vehicle in question was involved in a fender bender moments earlier and may have been trying to flee that scene.

"The witness said that individual was involved in an accident and went around the gate," Nassau County Police Commissioner Patrick Ryder said.
EMBED More News Videos

The three men in the car were killed, while seven people on the westbound train suffered minor injuries. The train crews, particularly the engineers, were described as traumatized.

The three victims worked at a local grocery store, and were identified by their manager as dairy manager Jesus Hernandez, and meat department workers Saul Martinez and Miguel Luna.

The grocery is about a block from the crossing. The store is now collecting donations for their families.

Surveillance video showed the men stopping at a nearby barber shop after work Tuesday night. The three then got back in the maroon SUV.

The front two cars of the westbound train came off the rails in the crash, and one end of the train struck the north side of the platform, crushing about 30 yards of concrete.

The westbound train was carrying approximately 800 passengers, while the eastbound train had about 100 aboard. One customer reported hearing the conductor yell "Brake, brake," and then saw flames.

Gov. Andrew Cuomo called for a "full investigation into the collision," which also forced the evacuation of nearly 1,000 passengers and crew on the two trains.

LIRR President Phillip Eng said the crossing gates and lights were functioning properly, but that the heavy delays are expected as crews work on two derailed train cars and "significant" track damage before assessing damage to the station platform.

Rail workers spent hours struggling to reopen the main line. But the 800-ton commuter train was off the rails and wedged against the platform of the Westbury station where it came to rest Tuesday night, a quarter mile from the railroad crossing.

The crash took place just eight days after an Eyewitness News investigation showed how motorists often ignore the bells and flashing lights and try to beat the LIRR crossing gates, with some crashing right through them.

"It's a tragic situation," said Eng. Why people try to risk their lives and others lives to save a few minutes. I can't answer because I would never put myself in that situation."

The LIRR said it will continue limited morning rush hour service Thursday on the Port Jefferson branch and the Ronkonkoma branch after running single track eastbound service through Westbury during the Wednesday evening commute.

The railroad will cancel about 14 westbound trains on those branches and suspend eastbdound (reverse-peak) service, saying the remaining trains will be able to operate at increased speed through the work zone, reducing delays.

Due to the train cancellations and anticipated delays and crowding, customers are advised to travel on alternate branches if possible, including the Babylon, Montauk, Oyster Bay and Hempstead branches.

The LIRR said it will be able to restore full train service after the damaged cars are removed and all track repairs are made.

Inspections found extensive damage to infrastructure including rails, signal equipment and third rail underneath the train that remains at the scene.