The drills simulated an active-shooter situation in Lower Manhattan.

The NYPD has held active-shooter drills in the past, but this was the first held underground at a subway station.

The first drill began at 4 a.m. with ten different arms of the NYPD participating, including officers from the counter-terrorism unit.

It simulated an active shooter on a subway platform with several people shot, including an NYPD officer. 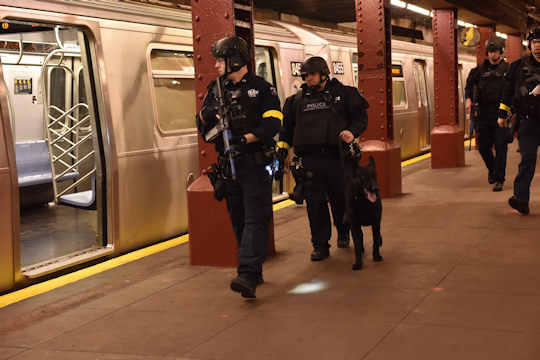 The drills were planned prior to the attacks in Paris but were updated, with officials adding an attacker wearing a suicide vest.

The FBI, Secret Service, and Homeland Security all took part.

Of about 30 simulated straphangers in the station, a dozen suffered "critical wounds" from weapons firing blanks. Firefighters removed them on thick yellow plastic sheets and law enforcement personnel took on the threat.

First responders from various emergency departments working as a team, with communication and coordination between agencies an important goal.

"There have been very significant improvements in that capacity since 9/11, also the coordination with the fire department," Bratton said.

The Department of Homeland Security used the exercise to test technologies including GoPro-like cameras worn by first responders and acoustic gunshot detection systems designed to give police and firefighters information to coordinate their responses. Such systems are being developed for surveillance of the subway system, the commissioner said.