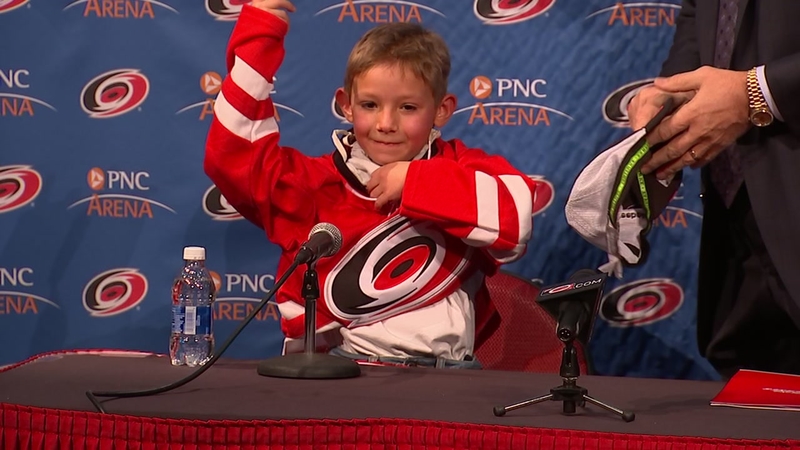 Chase attended his first hockey game in 2014 and became an instant Canes fan, but one player in particular caught his eye.

"He got an autograph from Jeff Skinner, and ever since then it's been his favorite player," mom Tonya Bass said. "So we went from not knowing anything about hockey to that's all he talks about, that's all he plays, that's all he likes."

"I made him a card, and I went to the bottom to let them sign stuff," he said. "And he got me a picture."

So when Chase was diagnosed in 2015 with a rare white blood cell cancer, he wished for one thing -- a chance to see his favorite player and the entire team in action.

Make-A-Wish Eastern North Carolina made it possible Thursday, with a front row seat at practice and a street hockey match-up with Chase as team captain.

"He's pretty good," Skinner said. "Nine goals. I think I was plus-eight today, so I'll take that. Just seeing how much fun he had, and for us to play a small part in that is a pretty cool feeling."

"He's got some good tips," Skinner said. "I don't know if I should share them all or the secret will get out."

Chase and his family will be watching from the stands Friday as the Canes take on Buffalo. The team signed him to a one-day contract consisting of free hockey gear and luxury box seats for the game.

"I think when the Canes found out about his passion and love of the Canes, it was an easy fit," Make-A-Wish's Bob Frazier said.

And the family couldn't be happier.

"The love that they show to their fans and how much they care about the community, it's not just about what's on the ice," Tonya said. "It's about what's on the outside too. It's about holding things together."
Related topics:
societyraleighcarolina hurricanesmake a wishabc11 together
Copyright © 2021 WTVD-TV. All Rights Reserved.
ABC11 TOGETHER
What not to donate in wake of Hurricane Ida devastation
Mom of 12 wins GMA's epic Breakfast in Bed for Mother's Day
How to make face masks from materials at home
Kids in quarantine: How to keep children comfortable, entertained at home
TOP STORIES
COVID Updates: Mayor de Blasio briefing | LIVE
Fox News Christmas tree set on fire in NYC | VIDEO
Parents outraged over fights involving guns at NYC high school
Class-action lawsuit planned against NYC's private-sector vax mandate
Major outage at Amazon disrupts businesses across the US
New NYPD data shows hate crimes on the rise in NYC
AccuWeather: Sharply colder; some snow possible
Show More
How to get your money back if you fall for Zelle/bank scam
New York pledges $2 million towards Afghan refugee resettlement
Eric Adams returns from Ghana, prepares to take office as NYC mayor
Residents speak out after wind causes building to collapse in NJ
Judge grants hearing to reconsider NYC's mandate for municipal workers
More TOP STORIES News