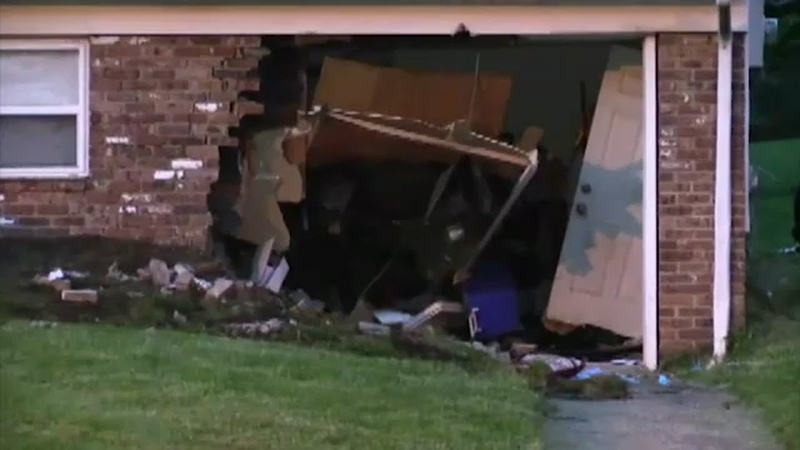 SOMERSET, New Jersey (WABC) -- Police in New Jersey are investigating the death of a 25-year-old man who was found with a fatal gunshot wound following a crash into a residential home.

It happened just after 11 p.m. Saturday on Foxwood Drive in Somerset, with the car leaving a gaping hole in the ground floor.

Franklin Township police received multiple calls reporting that a motor vehicle had crashed into a residence, and responding officers located a male driver who was later identified as Dominic Frederick unconscious behind the wheel.

While trying to reach Frederick to render aid, officers noticed that Frederick had been shot.

He was subsequently pronounced deceased at the scene.

"We're trying to make sense of it all ourselves," homeowner Phyllis Gadson said. "We got a young man who died in my house, and we don't understand what happened."

The investigation revealed that after the shooting, Frederick continued to drive his vehicle, eventually crashing into the a minivan in the driveway and then into the home.

"I heard the first gunshot, and I looked out the window and I saw a bunch of cars," she said. "Then I saw the second gunshot go off, and then the car ran into my grandmother's car and then into the house."

Frederick's death came just days before his 26th birthday, which he and his friends had planned to celebrate Tuesday. Instead, "Happy Birthday" balloons mark a growing memorial at the scene.

"He supported his whole family," friend Imani Riddick said. "He had two jobs, and two weeks ago, he started going back to school."

Family and friends believe he was an innocent bystander and not the intended target.

"He was going to school for psychology," friend Elmer Rodriguez said. "He wanted to be a youth counselor, and I told him he should definitely do it, because he was always guiding people."

The vehicle was occupied with other passengers, but they reportedly left the scene.

Police say the other occupants were not injured as a result of the shooting, and they are not being identified.

The circumstances of the shooting are unknown or have not been released. Anyone with information is urged to contact the Somerset County Prosecutors Office Major Crimes Unit at (908) 231-7100 or the Franklin Township Police Department at (732) 873-5533.