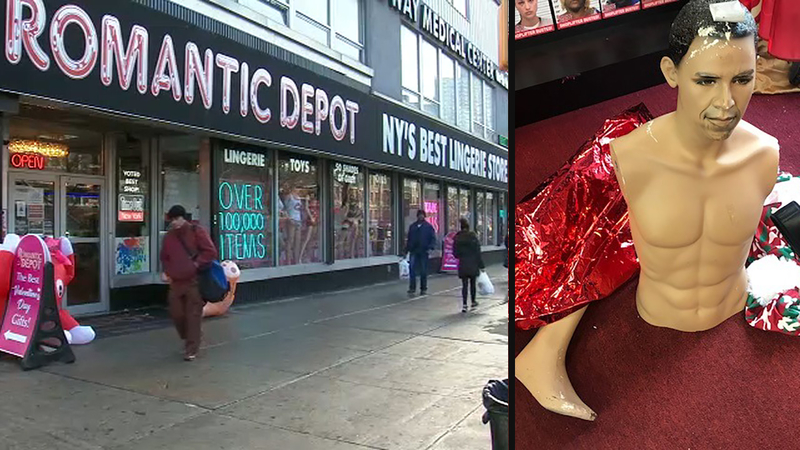 HARLEM, Manhattan (WABC) -- A man is under arrest after police say he smashed the front window of a Manhattan lingerie store and destroyed a mannequin resembling former President Barack Obama dressed as Santa Claus.

It happened just before 8 p.m. last Saturday at Romantic Depot on Broadway in Harlem.

Surveillance video shows the man walking by the business, spotting the mannequin and pacing back and forth before kicking the window.
EMBED More News Videos

He then walks to some curbside construction, picks up a cinder block and tosses it through the window, before dragging out the mannequin and leaving it shattered on the sidewalk.

"All we heard was glass shattering, so we're looking around, like, what is going on?" store manager Corine Lew said. "At first, we thought one of the mannequins fell through the window...All of us ran outside, and we didn't see anyone until we went to the window and saw a cinder block. OK, so it wasn't a mannequin, someone threw it. So we started looking around to see who could it be? And then we seen a man pacing."

She called police as workers from the store caught up to and held the suspect, identified as 41-year-old Rewell Altunaga. Lew said her co-workers tracked him down a few blocks away and that he admitted breaking the window. Officers arrived quickly and took Altunaga into custody.

Lew said there are 18 mannequins resembling various celebrities, including one of President Donald Trump that was next to the Obama mannequin in the window. But Altunaga, who reportedly lives at Bellevue Men's Shelter on East 30th Street, honed in on Obama.

Lew said it was clear he suffers from some form of mental illness.

"He said Barack Obama was telling him something, and Barack Obama's not gonna talk to him like that, and that he doesn't like Barack Obama," she said. "And he's so calm with it, so that's how we knew there was probably something wrong with him."

He is charged with criminal mischief damaging property and was released with a summons.

Employees say the suspect is regularly seen in the neighborhood and actually destroyed more property Monday, allegedly taking a bat to a LinkNYC booth across the street.