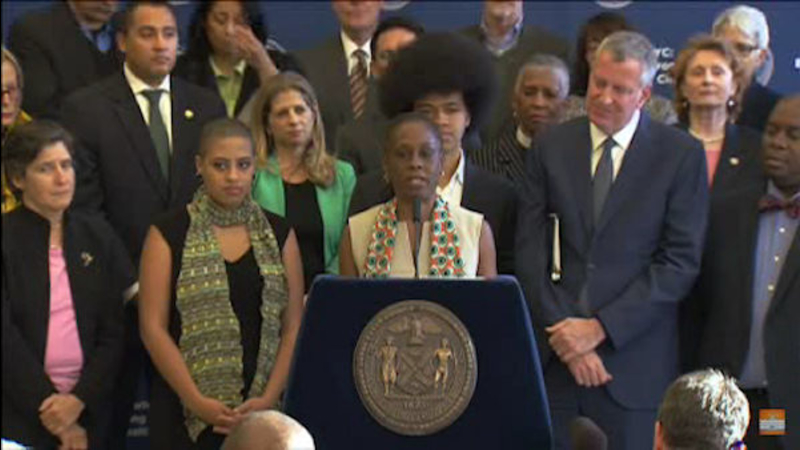 Monday with his wife and two children at his side, the mayor outlined the city's plan called ThriveNYC to fight depression and other mental illnesses.

The mayor has never been seen so emotional, as he remembered his alcoholic and abusive father, and honoring how his daughter, who also suffers with substance abuse, anxiety, and depression, on how she sought help.

"But he couldn't do what Chiara did. I often thought about that. He never got to meet his granddaughter. But he could not do what she was able to do," Mayor de Blasio said.

The mayor Monday unveiled a mental health initiative spearheaded this last year by his wife, because so many New Yorkers suffer from serious mental health problems.

Details of the plan include:
- 250,000 New Yorkers trained in mental health first aid.
- The city will hire 100 school mental health consultants.
- There will be a new Mental Health Corps with 400 doctors.

"The good news is that mental illness is treatable, we know what works," said Chirlane McCray, First Lady of New York City.

Mental health awareness became a big part of the city's first family two years ago when Chiara revealed her own mental health problems in a video.

Now, Chiara says she has hope that things will get better and the mayor says he wants the same thing for all New Yorkers. He wants that so much so that he will spend $850-million over the next four years on improving the city's mental health.