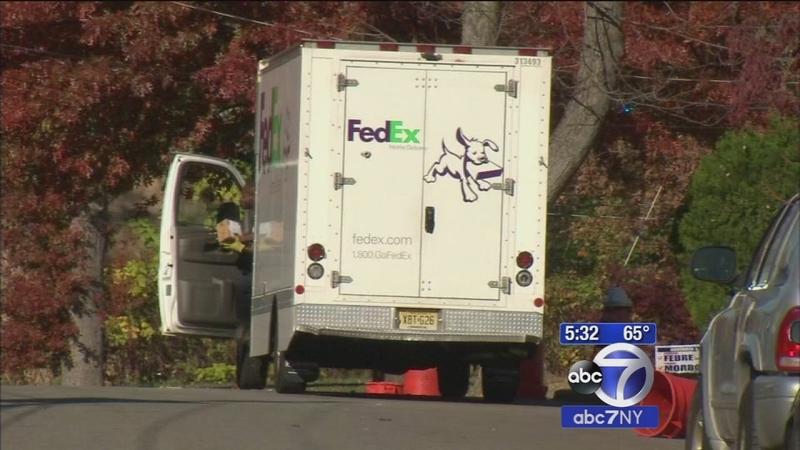 MAYWOOD, N.J. (WABC) -- Police in New Jersey jumped into action to chase after men accused of swiping packages off front porches in Maywood.

Three of the suspects were captured, but a fourth is still on the run.

They tried to drive down railroad tracks to make their escape, but were quickly caught.

Amateur video showed the arrest of one of the suspects after being captured trying to hide in the brush near the tracks.

They had apparently been driving through neighborhoods looking to steal anything left on front porches by delivery services. The so-called 'porch pirates' are accused of stealing 17 items delivered to homes.

Resident Gina Kiely noticed suspicious activity on her block and quickly called 911 while her stepfather took off after the thieves.

"The two guys jumped out of the passenger side and went to two porches at the same time and stole packages," said Kiely. "So I started screaming at them and took off up the block to try and get a license plate number."

In one case, the suspects stole a cake which was delivered and left on a porch, and in another crime took a gift which had been sent to a sick child.

Once police were in pursuit, the suspects were apparently trying to toss the stolen packages out of their black SUV.

But thanks to the watching eye of a neighbor, the crime was quickly solved.

"They went down railroad tracks and left their car there, they broke their car apparently, and were apprehended by the awesome police we have in this town," said Kiely.

The suspects were all from Paterson.

Police say an officer was assaulted by suspect Bryan Rivera as the cop was arresting another of the allged criminals.

In many cases, thieves follow the delivery trucks and strike moments after the packages are dropped off.

Authorities say these types of crimes spike leading up to the holiday season.