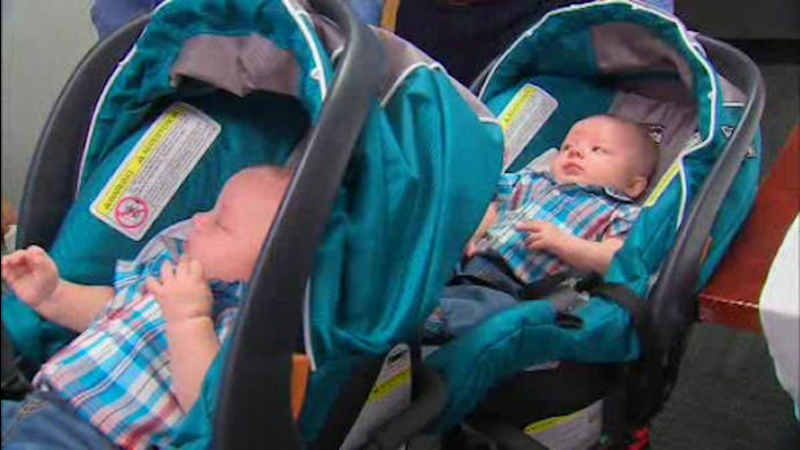 NEW HYDE PARK, N.Y. (WABC) -- A non-invasive procedure is helping newborn babies fix their sometimes misshapen ears. The procedure is not painful and it can help avoid future surgery.

Giving birth to twins is certainly overwhelming, but just one day after little Gavin and Liam Faeth were born, their mom and dad noticed something about their ears.

"You say, 'hm,' you kind of question yourselves, 'is this a little off?'" said Suzanne Faeth, a mother of twins.

And then coincidentally there was a pamphlet right in the hospital nursery.

"I think it was divine intervention because we literally saw this pamphlet for ear molding," Faeth said.

Dr. Nicholas Bastidas, a plastic surgeon at Cohen Children's Medical Center, took it from there.

Ear molding is a non-invasive procedure that involves no surgery and no anesthesia, if it's done when babies are as young as a few weeks old.

Basically a silicone device is put on with glue and tape for only three weeks. It can alter the memory of the soft cartilage on a baby's ear, changing its entire shape.

In Liam's case, there were small gathers in the ear and Gavin's ear was pointier. It's not that their hearing was affected, but later in life wearing glasses could be tough, and so could the reaction from other kids.

"It looks very cute and everyone rejoices that the baby's healthy. It becomes an issue later on when there's teasing involved, kindergarten years and beyond," Dr. Bastidas said.

And as you can see from some of the before and after pictures, the early intervention does work!


One of the other really good reasons for getting the procedure early on is that it covered by insurance, whereas later on it is less effective and can run you $6,000 to $10,000.