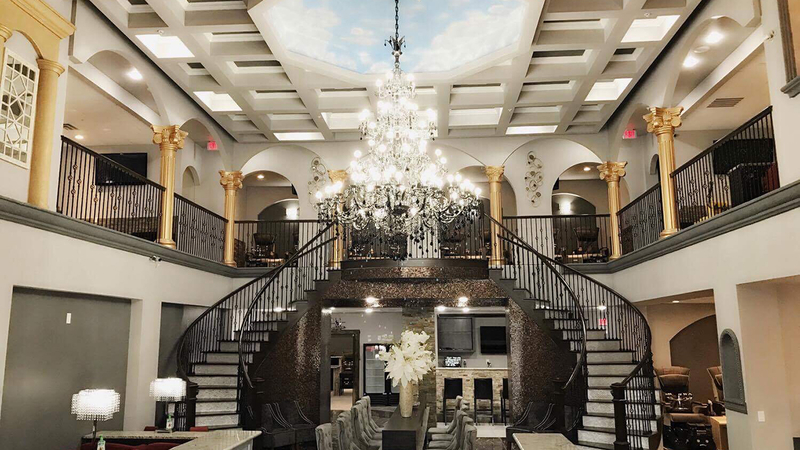 Check out this nail-salon mansion, complete with man cave and bar

CYPRESS, Texas -- A massive chandelier and a grand double staircase greet you as you walk into large iron double doors of a two-story, mansion-type nail salon in Cypress, Texas.

Gossip & Co. Nail Spa has been the talk of social media, and it's not even open yet.

It's the second one and now the largest in the Cypress area owned by Steve and Lulu Nguyen. The first Gossip & Co. Nail Spa was named one of ABC13's top 10 nail spas in the Houston area in 2015.

On June 6, the spa posted a video and photos on Facebook showing the progress of its construction, and it quickly went viral. The post generated more than 4,300 shares and nearly 5,000 comments.

The overwhelming response isn't much of a surprise. The decor is elegant and clean, with lavish touches here and there.

Marble floors and custom-made furniture with granite tops can be seen throughout the 8,500 square foot building. Crystals dangle from the lamps on each manicure table, and white mosaic tile line the steps of the grand double staircase.

The spa has more than 2,000 colors to choose from, 70 pedicure chairs and a room just for the kiddos with Disney-themed chairs.

Perhaps one of the most unique features of the spa is the man cave.

"There's no other nail salon with a dedicated area for men," Steve said.
The man cave features several TV monitors, neon beer signs and a nail bar. Steve said he wanted men, who usually do not visit a nail spa, to feel like they can hang out.

As you walk up the staircase, you'll find couple areas that can be used with a friend or significant other. It overlooks the amazing view of the downstairs area, with a closer look of the elegant gray, coffered ceiling.

There are several parts of the spa that are entirely isolated or semi-isolated. Those are great for small and big parties.

At Gossip & Co. Nail Spa, you get the luxurious feel without the luxury price tag.

The grand opening is expected at the end of July, and with so much online chatter already, plan on getting there early if you want to check it out.

Go to the Gossip & Co. Facebook page for more information.