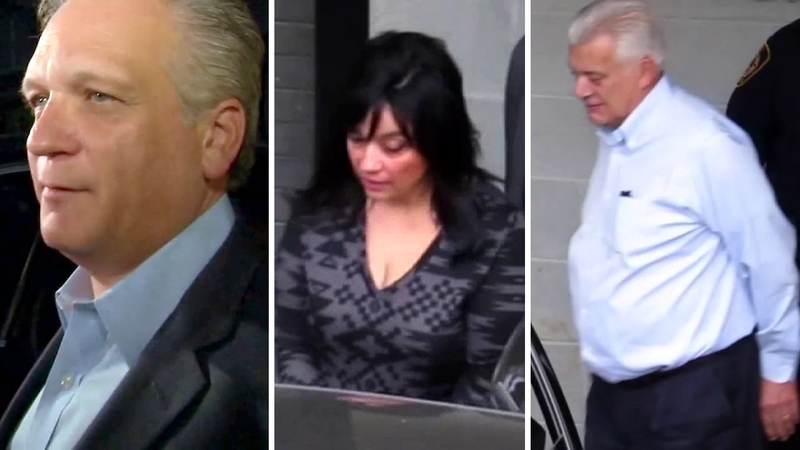 CENTRAL ISLIP, Long Island (WABC) -- A federal corruption probe has led to an indictment against the Nassau County executive, his wife and the Town of Oyster Bay supervisor.

Authorities allege that Edward Mangano and Venditto schemed "to solicit bribes and kickbacks" from the businessman. The charges include bribery, wire fraud, extortion and conspiracy to obstruct justice. If convicted, they could face up to 20 years in prison.

They said the illegal perks included hotel and travel expenses; limousine services; a massage chair; an expensive watch; and hardwood flooring at the Manganos' home.

The Manganos' attorney did not immediately respond to a request for comment.

Mangano and his wife were arrested Thursday morning. They walked out of their Bethpage home without handcuffs just before 7 a.m. and got into waiting vehicles.

"We're going to continue to govern, America is the greatest country in the world and you'll have the opportunity to decide for yourself," Edward Mango said.

The Manganos arrived at FBI offices with attorney Kevin Keating, who did not immediately return a call seeking comment. They are expected to appear in federal court in Central Islip on the 13-count federal indictment.

"The charges as alleged against Mr. Venditto are certainly underwhelming to say the least," said Brian Griffin, Venditto's attorney.

Sources said the "businessman-restaurateur" is Harendra Singh, who owned about 30 businesses, most of them in Nassau County. Some received contracts from Nassau County agencies and Oyster Bay. Singh is already facing charges in an ongoing bribery and fraud case and been cooperating with federal prosecutors in several investigations.

Singh is not mentioned in the indictment as a co-conspirator.

According to the indictment, Linda Mangano made more than $450,000 over four years at a no-show job at Singh's restaurants. When questioned by federal investigators, officials said she fabricated instances of work she had done at the no-show restaurant job.

"Mr. Mangano's wife Linda is charged with conspiring with her husband to hide the fact that she received a no-show job worth over $450,000 as part of the scheme as well as lying about that fact to the federal authorities," said Robert Caspers, US Attorney.

Federal investigators have been probing Mangano's connection to two contracts awarded to the businessman-restaurateur. One provided $237,000 worth in food to workers in the aftermath of Superstorm Sandy. The other supplied bread and rolls to the Nassau County jail in June 2012.

"Ed Mangano, Linda, and John Venditto lied about their conduct to investigators fanning flames that were too hard to contain," said William Sweeney, Jr., FBI.

Mangano, 54, a two-term Republican who touts his tax-cutting policies, was first elected in 2009.
He is the chief executive of a county of 1.3 million people and has control over a $2.9 billion budget, 7,250 employees, public works, social services and, most notably, the police.

He has won praise for his handling of the aftermath of Superstorm Sandy, which caused tremendous destruction on Long Island's southern coast. He also is overseeing the renovation of the Nassau Veterans Memorial Coliseum following last year's move by the New York Islanders hockey team to Brooklyn.

The wealthy county just east of New York City has been under a state-imposed financial watchdog since 1999.