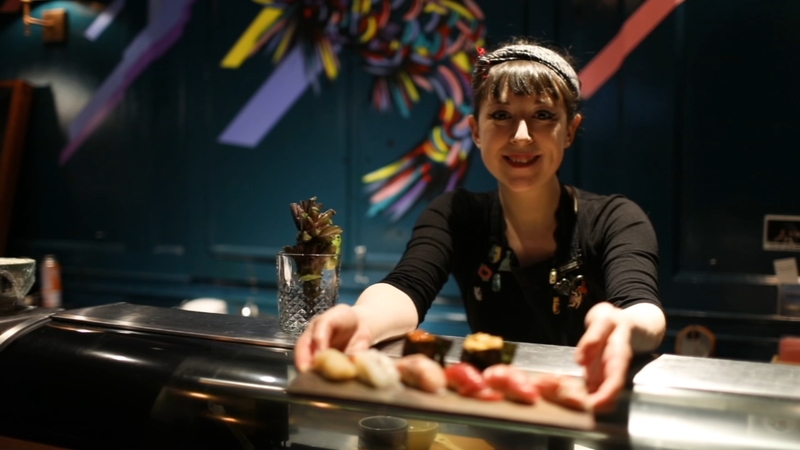 During school, a friend asked Tempest to cover a shift as a waitress at Tanoshi Sushi, a top sushi restaurant led by respected chef Toshio Oguma.

Tempest immediately fell in love with the texture of the rice, the variety of fish and flavors and crafting a perfect piece of sushi. She developed a tight bond with Oguma.

This experience led to her eventual new career path -- a sushi chef.

Tempest was one of the only female sushi apprentices in New York, and as she grew into an accomplished sushi chef, remained a rarity behind the sushi counter.

After leaving Tanoshi, Oona was approached by Michelin-rated Sushi Ginza Onodera in Midtown and hit it off with fellow sushi chef David Bouhadana. Soon after, David opened Sushi by Bou inside Jue Lan Club in the Flatiron District.

Tempest partnered with David and created a speakeasy pop-up called Sushi By Bae, which lives inside the Jue Lan Club, on the second floor, behind a curtain.

What started as a pop-up is now an ongoing $100 omakase offering that is completely separate from Sushi by Bou.

Oona orders her own fish straight from Tsukiji Fish Market in Tokyo, makes her own rice, soy sauce, and vinegar. She also handles all of her own reservations, which you can only make by texting a phone number.

Her table only seats a handful of people, making the experience personal and exclusive.