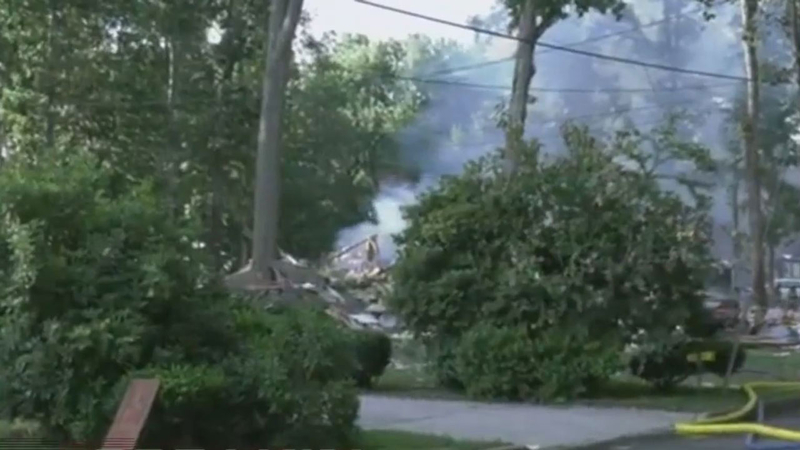 NEWFIELD, New Jersey -- Officials say the two people who died after a house explosion in Newfield, New Jersey have been identified as a 73-year-old husband and his 72-year-old wife.

John and Carole Paladino lived in the home for about 40 years, neighbors say.

The incident happened around 6:15 a.m. Saturday at a home on the 300 block of Oakwood Drive.

While the cause remains under investigation, the Gloucester County prosecutor's office said no foul play is suspected. Gas company workers were on the scene to shut off service to neighboring homes.

Dispatchers received numerous calls of an explosion that shook homes for several blocks. One man told Action News that his mother, who lives two blocks away, had pictures knocked off the walls.

Witness Robert White said, "It reminded me on an incoming artillery round from 1969 in Vietnam."

The house was destroyed by the blast. Video from Chopper 6 and the Action Cam showed a large debris field with smoke still rising from the scene. Some of the debris could be seen in nearby trees.

Another four homes were damaged, and all will have to be inspected before residents are allowed back inside.

Chopper 6 over scene of house explosion in Newfield, New Jersey on July 7, 2018.

Shortly after Action News got to the scene we spoke with Marleen Rambone.

She's the Paladino's next door neighbor.

"We were woken up to the whole bed being lifted up, it moved." We asked, your bed flew off the ground? "Yep flew up I thought it was an earthquake," Rambone said.

Debris from the home was found blocks away.

"I heard it was a stove, to have gas. I saw the delivery truck," said Rambone.

Neighbors say the couple was extremely involved in the local community, and also their church.

In fact, Carole Paladino was a catechism teacher at their church.

The county fire marshal is investigating, along with several other agencies, including a state police arson-bomb unit, the federal Bureau of Alcohol, Tobacco, Firearms and Explosives and the Franklin Township police department.

A home has exploded in Newfield Township, Gloucester County. 1 person is dead. Searching for another. @6abc pic.twitter.com/sHcpffqAgi

Autopsies on the couple are scheduled for Sunday.