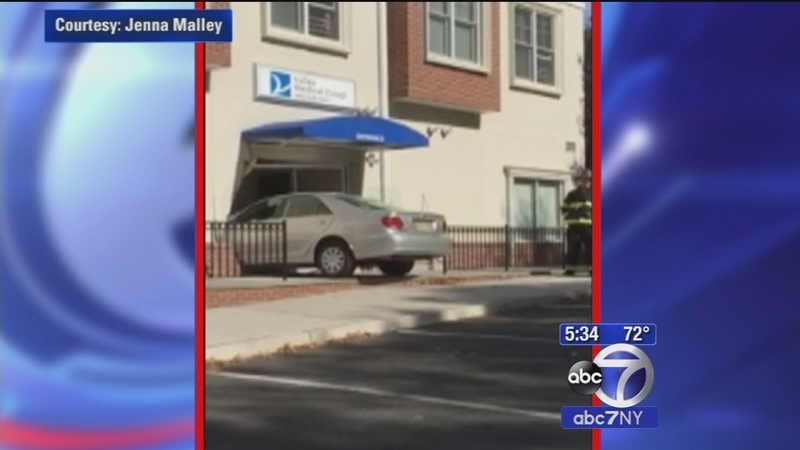 PARK RIDGE, N.J. (WABC) -- An elderly woman crashed her car into the rear lobby of a medical building in Park Ridge on Wednesday.

Sergeant James Babcock said the Park Ridge Police Department received a call about a car that ran into a medical office. When police arrived on the scene, they saw the Toyota Camry partially in the building and the driver removing herself from the car.

She was taken to the hospital for observation.

There were no injuries in the lobby. People were shaken up, but no one was hit by the car.

The building department went to the scene to asses the stability of the building to determine if it could be safe to reopen.

"I heard a loud noise, we heard screaming..there was a car in the waiting room foyer," said Dr. Joseph Hyon of the Valley Medical Group.

The driver, witnesses say, didn't appear to be too hurt. The crash happened near a reception lobby and a receptionist at the back entrance for patients at the Effron Medical Building.

"The girl that was sitting at the front desk obviously noticed the car coming through, when she screamed everybody came running, and they were able to evacuate," said Rose Walters of the Valley Medical Group.

Luckily no one was walking out at the time. Crews are boarding the damaged area until repairs can be made.

"There was a patient who was checking in, and apparently was a little overzealous with the gas and ran right through the front door," said Dr. Hyon. ("Certainly you guys had to make sure everyone in the waiting room was OK?", we asked.) "They're OK, no one got hurt. It was a very close call, but no one got hurt," he said.