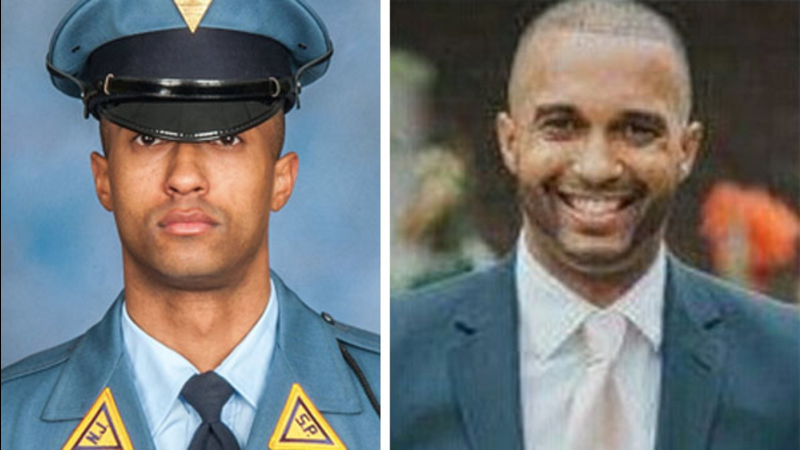 New Jersey State Trooper Frankie Williams was newly married, but had lived in the home for several years and was well regarded.

"His dream was to become a state trooper. He was in school and then he finally got his dream job. Now this. It is sad," Gail Evans of Egg Harbor Township said.

"The guys like me who didn't have people looking out for them, he was the one who stepped up and looked out for us. He took care of us. He took us under his wing," Warren said.

Miles away at the State Police barracks in Port Norris where Williams was posted, the flag was lowered.

The 31-year-old rookie was killed Monday night responding to reports of a driver moving erratically when a car fitting the description of that vehicle slammed into William's police cruiser.

The driver of the Toyota was also killed and identified as Lloyd Rudley, 61, of Elmer, N.J.

The young trooper was remembered as humble, but focused.

He shared with us memories of a stand-up guy who was popular, but made it a point to reach out to those who had trouble making friends.

"He was the kind of guy who would go up to the kids who got bullied and take care of them," Warren said.

As a neighbor, Williams was admired for constantly improving the house he purchased and making a point of reaching out and helping.

"When the neighbor had to go up north and his wife was here alone, he came over, did the lawn, and cared for her like she was his sister. Really nice, just that kind of guy," neighbor Doug McCluskey said.

Prior to becoming a state trooper, Williams worked at the Lowe's in Egg Harbor Township.

In a statement, a spokesperson for Lowe's tells Action News, Williams spoke about becoming a state trooper throughout his time at the store.

Before becoming a state trooper, Frankie Williams worked at the Lowe's store in Egg Harbor Township. He started as a seasonal employee in March 2008 and worked his way up to loss prevention manager before leaving in August 2015. Those who worked with him remember his infectious smile and the impression he left when you met him. He shared with co-workers that his dream was to get his master's degree and become a state trooper. We are saddened by his loss and are comforted that he lived his dream, if only for a short while.

To those who knew him, it was simple: Frankie Williams was a good guy.