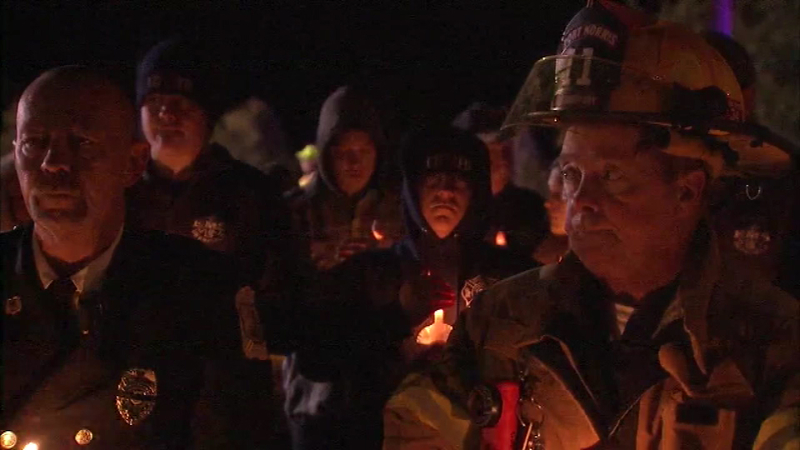 "We grieve as New Jersey for a young man that represented the best of the best," said Rep. Jeff Van Drew (D-N.J.).

Trooper Williams' mom, Victoria, and her fiancee were among those attending the candle light vigil to honor his memory.

"The definition of a hero is a noted person for a courageous act or nobility of character. And that night, Frankie showed it," said Leesburg Volunteer Fire Department Chief Walt Hughes.

Monday night, Trooper Williams was responding to calls of a man driving erratically. That turned out to be 61-year-old Dr. Lloyd Rudley.

Investigators say suddenly Rudley's Toyota veered from the southbound lanes of Route 55, crossed over a grassy median into the northbound lanes and crashed head-on with Trooper Williams' patrol car. Both men were killed.

Williams was only 31 years old and recently married.

In tearful remarks, Trooper Williams' mother says her son used to tell her when he was a little boy that one day she was going to have lots of brothers. She had no idea they would turn out to be New Jersey State troopers.

"And I love the way you care, appreciate my son, because I appreciate what you have done for me. Every time I fall down, you pick me back up. Thank you," said Victoria Williams.
EMBED More News Videos

The mother of Trooper Frankie Williams spoke at a vigil after a crash took her son's life earlier this week.

One of the more tearful moments came when one of the firefighters sang "How Great Thou Art", a song Frankie Williams' mom says her mother used to sing to her as a little girl.

"That just shows me signs that my son is showing me that he's still giving me the best of the best of his love," said Victoria Williams.