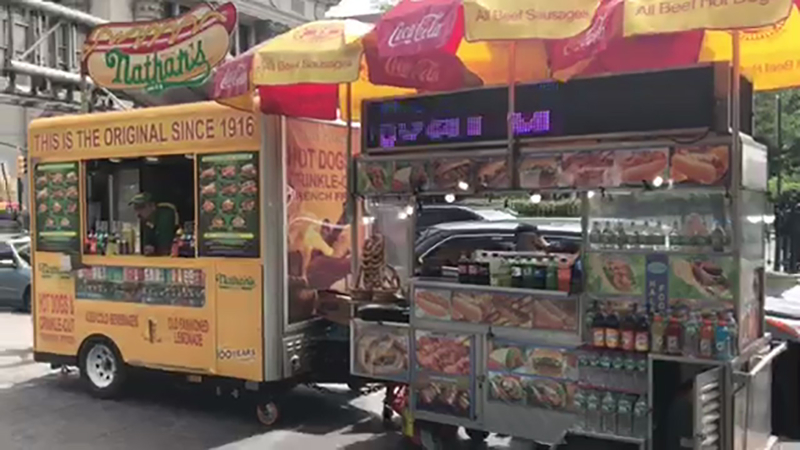 According to a report, Manhattan carts and trucks had more violations last year than in the other four boroughs combined. As many as six carts would have been given "C" ratings if the rating system existed last year, and the top 10 violations were tied directly to food safety.

"Hygiene and quality of food is always a concern when you have to eat off the street," one area resident said.

Food trucks and carts are part of the fabric of New York City, and for many, they are the go-to place for breakfast, lunch and dinner. And soon, these kitchens on wheels may have to adhere to the same standards as restaurants.

"You wonder about these, the cleanliness of these things once in awhile," another area resident said. "Where are they washing their hands? Where to go to the boys' or ladies' room?"

It's been talked about for years, and City Council member Karen Koslowtiz made the move to sponsor the bill. She said that in order for it to be effective, she hopes the health department -- which oversees letter grades -- would hire more inspectors.

"You know, I said, it's time," she said. "People that would normally hesitate to do business with food carts, it would help them decide if they want to eat from a food cart."

Jamal Clarke owns a food cart, but he isn't sold on the idea and wonders if the same criteria used to grade restaurants should be used for his type of business.

"A lot of variables can go wrong," he said. "If the wind is blowing, and that could lead health (department) not to give an A, not to give us an A."

Others have gone on record saying they are looking forward to the change, saying it will help business since customers will know their operation is safe and clean.

"The customer is going to start thinking, why this push cart got a B and that one got an A," food cart worker Jose Ahmed said. "This is how it is going to work."