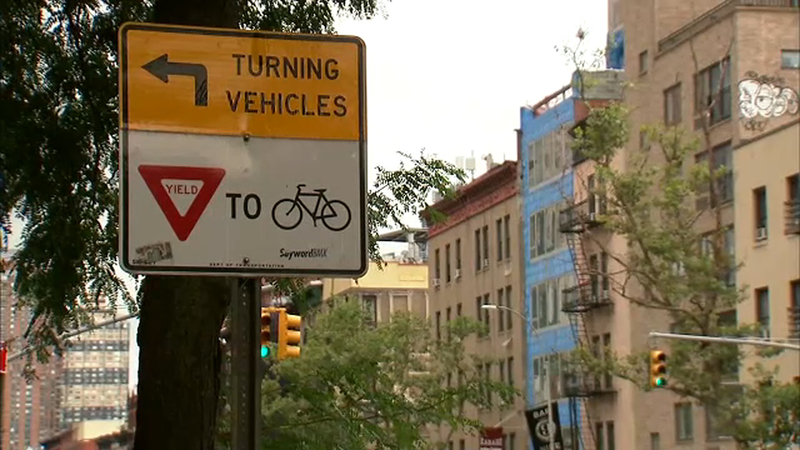 The 17-year-old boy was traveling eastbound on Castleton Avenue when he was struck by a vehicle around noon. He was pronounced dead at the hospital, and the vehicle stayed at the scene.

The new pilot program approved by the city will allow cyclists to follow pedestrian head-start signals at 50 intersections.

"NYC DOT is committed to the safety of all road users, and while cycling safety has improved considerably, there is still progress to be made. DOT's recent Safer Cycling study found that 65% of cyclist fatalities and 89% of cyclists killed or seriously injured in vehicle crashes were struck at intersections," said Sean Quinn, NYC DOT Senior Director of Bicycle and Pedestrian Programs. "We responded to this data as well as to requests from the cycling community and the council member who had asked that we expand the road users who can legally use so-called pedestrian head-starts. We will be watching the results closely, measuring the various impacts of the pilot to determine next steps at the end of the study period."

As part of the initiative from now until October of this year, DOT will install temporary signage at intersections that already have Leading Pedestrian Intervals (LPIs). With these signals, people on foot are given advanced time -- seven to 11 seconds -- to cross before drivers may proceed through the intersection or make turns through crosswalks. Cyclists will still be legally required to yield to pedestrians in crosswalks.

"As an avid bike rider, I understand the dangers of bicycling in New York City, especially at intersections," he said. "As a city, it is our duty to ensure we are doing our best to ensure the safety of pedestrians and bicyclists. This pilot program is a good step in the right direction and a long overdue victory for advocates and community residents from my district who worked tirelessly to ensure this initiative came to life."

DOT's 2016 Don't Cut Corners study had found a 56 percent reduction in serious injury and fatal pedestrian and bicycle crashes from the LPI treatment. With high safety benefit and low installation costs, DOT installed a record 832 LPIs in 2017 for a total of 2,547 LPIs throughout the city, seven times the number prior to Vision Zero.