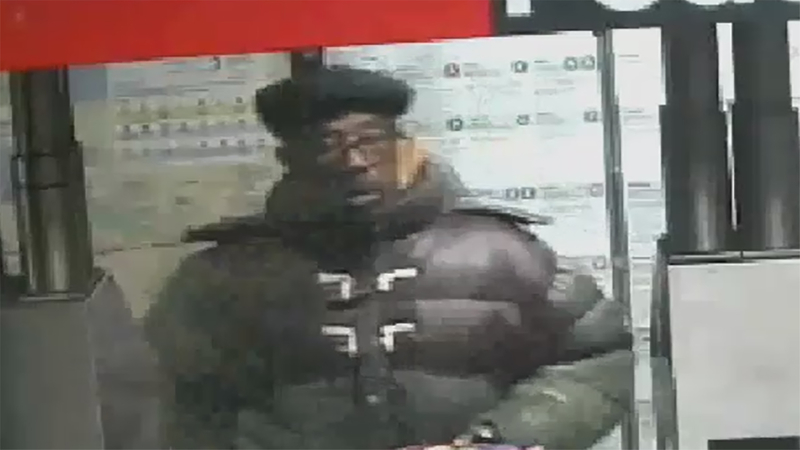 NEW YORK (WABC) -- The NYPD has arrested a suspect in connection with a string of robberies targeting women in Manhattan over the past two months.

In most cases the man followed his victims as they entered residential buildings and demanded money.

When the UPS guy arrived with a package for Betsy Brady on Saturday, she wasn't about to buzz him into her Harlem building in sight unseen.

After all, last week she learned the hard way what can happen.

"I went upstairs and I kind of said did this really happen? What just happened?" Brady said.

The NYPD blurred Brady's face in the video, showing a man she said appeared to belong here, helping her to the elevator with her bags.
EMBED More News Videos

Surveillance video captured a robbery inside a building in Harlem.

But that's when the friendliness stopped.

She gave him the two dollars she had in her pocket and he left without further incident.

But cops believe the same suspect has hit eight people since October in similar cases throughout Harlem and into the Upper East Side.

In one case, police say the suspect followed a 56-year-old woman into her building in the vicinity of Broadway and West 149 Street and stated "If you give me all our money there will not be a problem." He took an unknown amount of cash and fled the scene.

In another incident, he approached a 78-year-old woman from behind as she was checking her mailbox, placed a knife to her throat and removed two rings along with an unknown amount of cash.

Saturday, police announced an arrest in connection with one of them. They say they caught 65-year-old Frank Peterson in possession of drugs. Once at the precinct, an officer recognized him from this wanted poster.

Back at Betsy's apartment building Saturday neighbors were relieved, but still quite unsettled.

"I'm scared now, I'm scared to do the laundry, I don't want to go to the basement by myself," said Maya Finch, a resident. "I carry pepper spray, I think a lot of women do."

"I just need some people to think twice before they let someone in or else there will be another mugging or something worse," said Valentina Finch, a resident.