7 On Your Side: He's back! We make 4th trip to problem jeweler 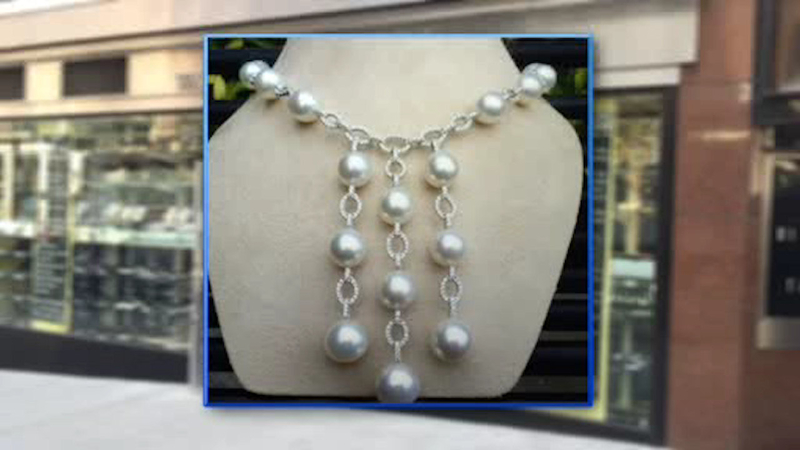 7 on your Side: How to safely sell your jewelry

NEW YORK (WABC) -- Lee Rosenbloom is no stranger to 7 On Your Side, having made four appearances on Eyewitness News. And that's a franchise record.

Rosenbloom's jewelry stories have garnered the most complaints of any other in our area, with the problems spanning nearly two decades and the consumers frustration so similar. It was time for us to beat yet another path to this merchant's door.

It all began back in 1999, when Tappy Phillips confronted the consignor. He reappeared in 2001 and again in 2004, and each time we came, the jeweler coughed up cash for complaining customers alleging they gave their jewelry to repair or sell on consignment, then could not get their precious items back for months or even years.

Now, we were back again to see Rosenbloom, who moved and renamed his store, Plaza Collectibles, this time on Aziza Ben's behalf.

She was looking to get back a Harry Winston gold watch and a diamond and pearl necklace that she left with Lee two years ago after he promised to pay her $20,000 for the pair or give back both items to her.

But the money never materialized.

It was the exact same put-off we heard from frustrated customers over a decade ago. But this time Ben accused Lee of adding a new excuse.

"He said, 'Come on Sunday,' and then he said he was robbed on Saturday," she said.

Lee claimed he was cleaned out in a burglary last year, and that he failed to lock up valuables like Ben's watch and necklace in a safe and didn't have insurance.

Afterwards, Rosenbloom even dropped his offer from to $6,000, blaming the customer as being unreasonable and saying the merchandise wasn't worth that much, even though no formal appraisal exists. He also said Ben hasn't called him back.

The big takeaway is to have jewelry independently appraised, taking pictures and video to show the condition. Additionally, save receipts to prove worth and get the terms of consignment in writing. And insure your jewelry before relinquishing it. Ben is now suing Rosenbloom, and the jeweler still hasn't answered her complaint.
Related topics:
7 on your side
Copyright © 2021 WABC-TV. All Rights Reserved.
7 ON YOUR SIDE
Model couple's wedding bash derailed after a booking mix-up
How to avoid falling for job scams
What to do if your car was damaged by Ida's flooding
Tips for detecting and reporting price gouging following Ida flooding
TOP STORIES
AccuWeather LIVE | Flash Flood Watch in effect for NYC, Tri-State
1 dead, 14 hurt in grocery store shooting near Memphis
Arrest warrant issued for Gabby Petito's fiance Brian Laundrie
Vaccine deadline looming for NY health care workers, NYC teachers
Former Eyewitness News reporter Chauncey Howell dies at 86
14-month-old boy falls down manhole at NJ playground, mother saves him
Glass panel falls 5 stories from NYC building, shatters on sidewalk
Show More
Runaway bull finally corralled after 2 months on the loose
The battle over vaccine mandates in Newark
Kids participating in COVID vaccine trials offer hope to families
Why breakthrough COVID cases are concerning
Long Island boy offers hope, inspiration with leukemia battle
More TOP STORIES News