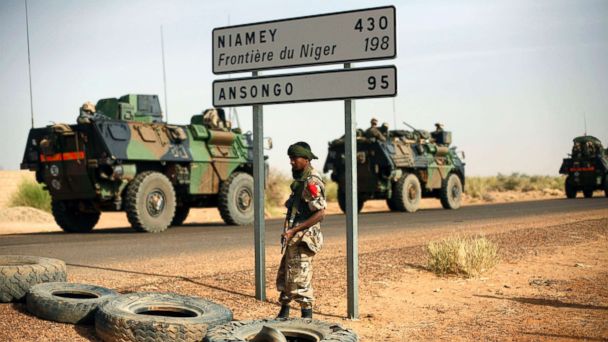 Nearly one month after the deadly ambush in Niger that killed four American soldiers, ABC News has learned new details about how the attack unfolded on October 4, including how a small group of Americans went back into the firefight to locate a vehicle that had become separated from the group.

The team of 12 Americans and 30 Nigerien soldiers were departing the village of Tongo Tongo in six to eight vehicles when they faced what sources close to the investigation described as a sophisticated ambush on either side of a tree-lined road. The Americans were in three of those vehicles, which consisted of two pickup trucks equipped with machine guns and an unarmed Land Cruiser.

According to a senior U.S. intelligence source, the more than 50 ISIS-linked fighters who attacked the convoy appeared to be a well-trained, seasoned force who used machine guns, mortars, and rocket-propelled grenades.

"We're not leaving these guys behind"

As they took fire, Americans in a lead position got out of their vehicle to return fire, the official said. But as the fight intensified, the group of Americans and Nigeriens decided to get out of the "kill zone" and move forward approximately 200 yards.

The two U.S. pickup trucks, taking enemy fire as they progressed forward, suddenly realized the Land Cruiser was nowhere to be seen and were unable to make contact with the vehicle.

"One guy said, we're not leaving these guys behind," the official said.

Two of the Americans turned back on foot to search for the missing vehicle while others followed in the pickup truck as Sgt. La David Johnson, who was later killed, gave them cover by firing with the machine gun mounted on the back of one of the pickup trucks.

It was then that the separated Land Cruiser was hit by a mortar and then gunfire. Inside were Staff Sgt. Bryan Black, Staff Sgt. Jeremiah Johnson, and Staff Sgt. Dustin Wright -- all killed in the attack.

The battle was fierce as the American and Nigerien forces fought to keep from being overrun by waves of fighters. The Americans continued to fight from their vehicles and on foot. At some point, one of the U.S. pickup trucks was disabled.

"They were running," the official said. "They were being chased and being fired upon."

According to the official, Sgt. La David Johnson, whose body was not located until two days after the attack, became separated from the rest of the group, possibly because he was ejected from one of the vehicles as it bounced across the rough terrain.

"The French saved out men"

Two hours after the first shots were fired and one hour after the Americans called for help, French Mirage jets buzzed low over the battle space. Though they didn't drop weapons, the action caused the enemy to cease fire and begin retreating into the local population.

"The French saved our men," the official said. "Yes, we lost four. But we would have lost everybody if it wasn't for the French."

A Nigerien quick-reaction force was also deployed and arrived later, Chairman of the Joint Chiefs of Staff Gen. Joseph Dunford said during a Pentagon briefing on Monday.

Later, a team that investigated the scene of the attack reported the fighters used perfectly spaced firing positions along the road -- suggesting a level of sophistication to the ambush.

A change in plan the day before; a greater risk

As ABC News learned earlier this week, the team of U.S. and Nigerien forces was given a second, potentially more dangerous task, after completing a routine reconnaissance mission on October 3.

According to two senior intelligence sources, the new task was to kill-or-capture a high-value target believed to be in the area. That target -- code named Naylor Road -- is one of the "top three objectives in Niger" with ties to both al Qaeda and ISIS.

But the change in plan meant the team was out for over 24 hours, putting them at greater risk. Leaders on the ground had assessed that contact with the enemy was unlikely in the original mission, Dunford said. It remains unclear if the forces had adequate resources to pursue the new task.

A second U.S.-Nigerien unit was directed to meet up with their patrol, but when they could not, the original 12-member team and their Nigerien partners were told to proceed anyway.

"They should have been up and back in a day. Because they were up there so f------ long on a mission that morphed, they were spotted, surveiled and ultimately hit," the official said.

When they reached their destination in the early morning hours of October 4, the soldiers found an abandoned campsite instead of Naylor Road and decided to head south back to base camp.

Along the way, the group stopped in Tongo Tongo around 8:30 am to allow the Nigerien forces to resupply. While there, the Americans met with a village elder, who was "obviously and deliberately trying to stall them," according to the official.

When two motorcycles raced out of the village, the unit suspected something was definitely wrong. They didn't travel more than about the length of a football field before they came under attack.

Despite suspicions raised among the group about the village elder, the official told ABC News that he was the person who handed over Johnson's body to local Nigerien troops on October 6.
Report a correction or typo
Related topics:
abc newsnational
Copyright © 2021 ABC News Internet Ventures.
More Videos
From CNN Newsource affiliates
TOP STORIES