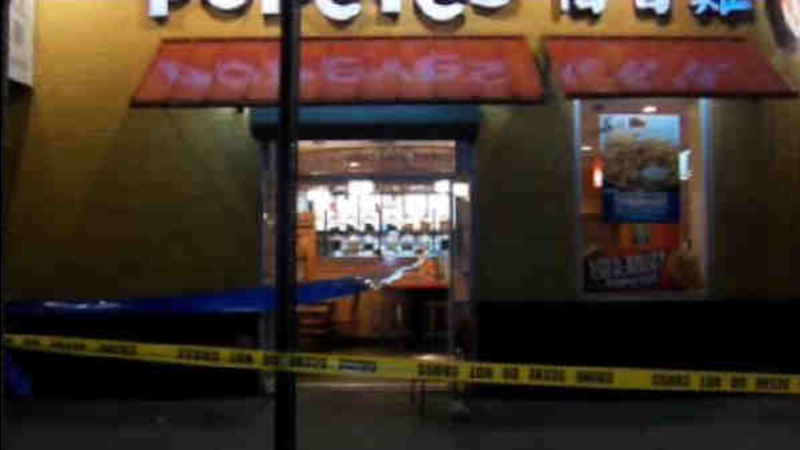 SPRINGFIELD GARDENS, Queens (WABC) -- An off-duty NYPD officer fatally shot one of two men who allegedly were trying to rob him Monday night during a Craigslist scam in Queens.

"I saw him with his gun drawn, that was the only thing, I stood my distance," said Eric, a witness.

In the exclusive video, the silhouette seen in the distance is an off duty NYPD officer with his gun drawn pointed at Devon Holder. The 30-year-old had just seconds before, allegedly tried to rob the officer.

Eric didn't want to show his face or be identified.

Around 10:30 Monday night, the officer had come to 145th Avenue to meet Holder and a second man.

The suspects had placed an ad on Craigslist, saying they had a white BMW for sale.

Sources tell Eyewitness News, one suspect told the officer the vehicle was down a nearby driveway, but once there, there was no car.

Holder allegedly pulled out this BB gun, grabbed the officer's wallet, and tried to rob him.

When Holder spotted the officer's badge, the officer pulled out his gun and shot Holder.

Eric says the officer was focused on Holder.

"He was on the phone with his gun drawn with the gentleman on the ground, but I didn't know he was a cop until I heard him on the phone saying, might have been telling someone his badge number," Eric said.

In the exclusive video, you see back up arrive.

Holder was on the ground, and officers are seen looking for that BB gun, which police say they did eventually find.

Eric watched as paramedics took Holder away, he died at the hospital.

Police are still looking for a second suspect and the investigation is ongoing.