Everything you wanted to know about Super Bowl championship rings 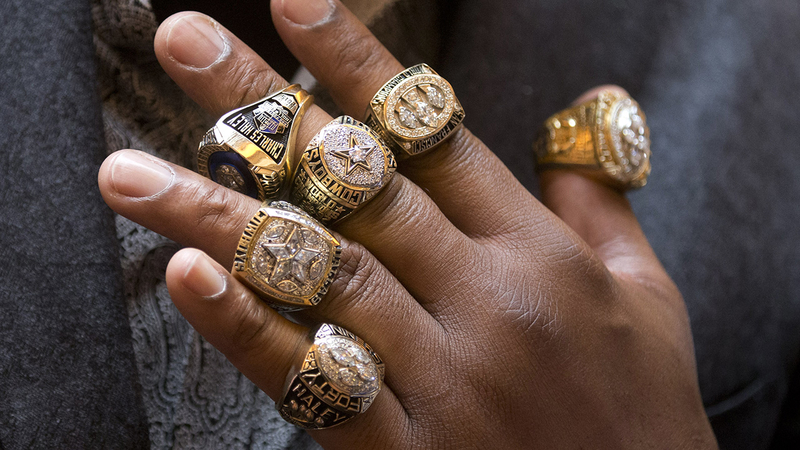 Everything you wanted to know about Super Bowl championship rings

MINNEAPOLIS -- Months after winning the Super Bowl, the victorious team has another winners' perk to look forward to: Super Bowl rings.

Ever since Super Bowl I in 1967, members of the winning team have each received a commemorative ring with features like their team name, the year, the Super Bowl number and - of course - a lavish array of gemstones.

The very first Super Bowl ring featured a one-carat diamond that was surrounded by an outline of a globe representing the game's status as the world championship of football.

Since then, the rings' designs have become more complex. Many of them now feature the team's logo, colored gems and a representation of the Vince Lombardi Trophy.

According to Minneapolis-based Jostens - the jeweler that has produced more than half of the Super Bowl rings and probably also made your high school class ring - diamonds and gold are the materials of choice for the Super Bowl rings, although platinum has also been used on occasion.


Every player on the team gets a ring, and teams often produce additional rings for other members of the organization. Those rings are typically smaller, contain fewer diamonds and are made using non-precious alloys to keep costs down.

After the game, it takes four months of collaboration with the winning team to design the ring, according to Jostens.

"Our main objective in designing with the team is to capture the story of the season. We are very proud to be the storyteller of champions and our process always begins with asking the team what symbols and sayings really encompassed their season," Jeff Peterson, Jostens' vice president of marketing, told ABC.

Peterson declined to reveal how much the rings are worth, saying the price is kept confidential between the company and the league.

One of Tom Brady's Super Bowl LI rings - not Brady's personal ring, but one of the rings he authorized to have made - is currently up for auction with a bid of nearly $50,000. The value on the ring's gold and gemstones alone is estimated at nearly $30,000, according to ESPN. That ring is 10 percent smaller than Brady's personal ring, which contains 23 more diamonds.

According to Peterson, that year's ring is the largest championship ring ever produced. It featured 10 carats of white gold, 5 carats of precious stones and more than 280 diamonds.

And despite the increasing size of the rings, players still choose to wear them.