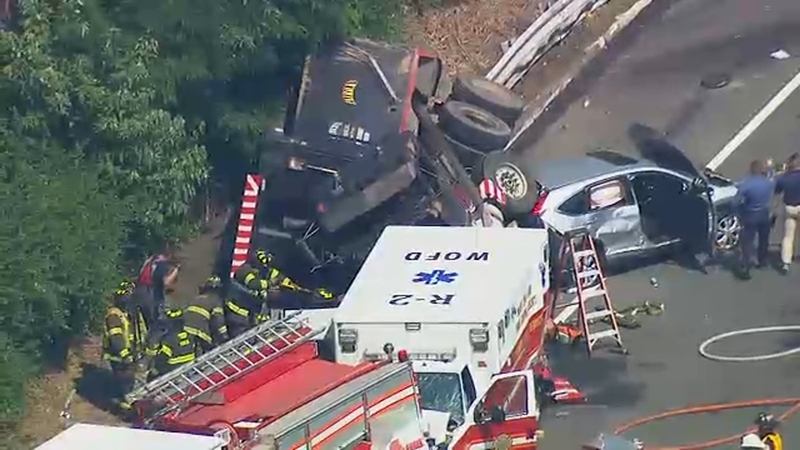 WEST ORANGE, New Jersey (WABC) -- Police said 14 people were injured, 2 critically, in a multi-vehicle accident, which involved a dump truck striking a New Jersey State trooper and a firefighter in the eastbound lanes of I-280.

Officials said the trooper and firefighter were helping a car crash victim board an ambulance before the accident, which happened around 10:20 a.m. near milepost 9.8. in West Orange on Tuesday.

The chain of events began when a Kenworth dump truck was traveling eastbound and struck a Honda Accord and Ford Econoline van, police said. The van was pushed into a Honda CR-V and then into a State Police vehicle, which was parked at the time to respond to another accident. One trooper was inside.

A trooper and firefighter sustained serious injuries when the ambulance was struck, police said. The trooper in the police car was moderately injured, and another trooper sustained a severe hand laceration when he jumped over a guardrail to avoid being struck by one of the vehicles.

The driver of the dump truck was pulled out before the cab of the vehicle was engulfed in flames.

All three troopers and the firefighter were transported to University Hospital in Newark. Several other people were taken to area hospitals for minor injuries.

The eastbound lanes of I-280 were closed for approximately 11 hours.

The cause of the crash remains under investigation. Police said the dump truck remained on scene.

Residents of a nearby senior complex were looking at the first accident when they saw the driver of the dump truck driving down I-280, and realized it wasn't going to stop.

"So I'm there watching the other accident, the next thing you know this dump truck comes barreling down 280 and then does what it did," said witness Robert Hoatson. "It rammed this white car, it then rammed the state trooper cars and as I said the troopers, thank God, were able to walk. It looked like they were walking very gingerly as if they'd been stunned."

New Jersey State Police say a dump truck struck two troopers outside of their patrol cars and multiple pedestrians in the eastbound lanes of I-280.