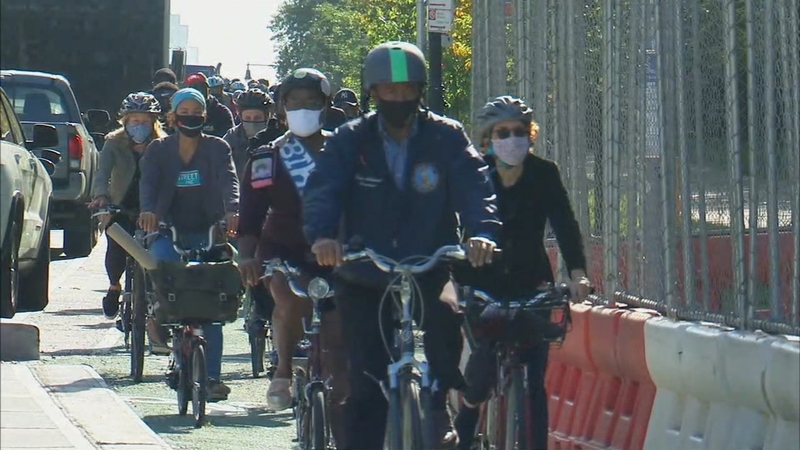 DOWNTOWN BROOKLYN, New York City (WABC) -- Two new major protected bike lanes were unveiled in Brooklyn Thursday as New York City continues efforts to cut down on pedestrian deaths as part of the Vision Zero program, which has only increased in importance as the coronavirus pandemic has led to an increase foot and bicycle traffic.

The Flatbush Avenue bike lane links Downtown Brooklyn and key East River crossings with the Central Brooklyn neighborhoods of Prospect-Lefferts Gardens, Flatbush, East Flatbush and beyond, and is near several cultural institutions.

Related: Pedestrian, cyclist deaths down in NYC, NYPD data shows, but it may not last

The 4th Avenue bike lane was the final stage of a three-year project to add eight miles of protected lanes along the key corridor from 65th Street to the Barclays Center.

The just-completed segment spans 1st Street to Flatbush Avenue near the Barclays Center.

Cycling deaths are down so far this year, 20 compared to 26 at the same time in 2019, which is a huge win for the city's effort to protect residents.

The DOT has also reduced the speed limit from 30 to 25 miles per hour, which they say has made streets safer.

Officials say 106 miles of bike lanes have been added in Brooklyn since 2016, with plans to add 10 more miles this year.