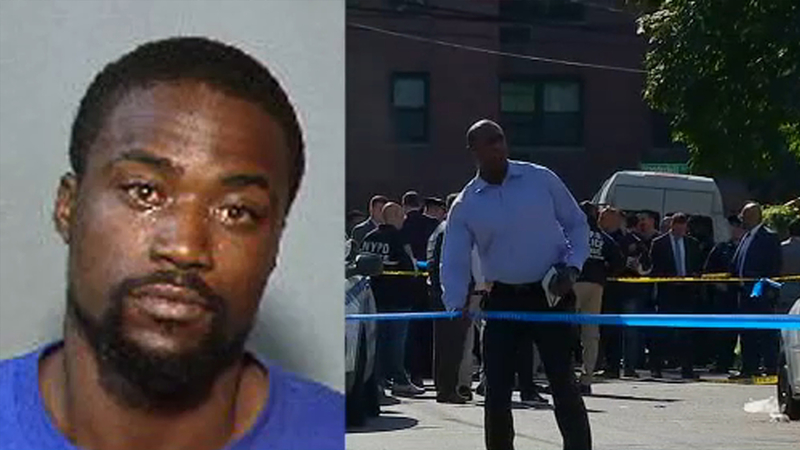 CLIFTON, Staten Island (WABC) -- An NYPD officer was shot and a man was killed during a domestic violence call on Staten Island Monday.

The shooting happened just before 8:45 a.m. at 20 Prince Street in Clifton.

The officers were responding to the domestic violence call and looking for 39-year-old Gregory Edwards at the time of the shooting.

A woman who had filed the complaint called police to say she had seen her assailant.

Police Commissioner James O'Neill said that the officers moved the woman a block away after she pointed out the suspect to police. Police called for backup.

The four responding officers then attempted to arrest Edwards, but the NYPD says he resisted arrest.

The suspect had already been hit with a Taser, when he pulled out a nine millimeter pistol with his finger on the trigger.

"The suspect immediately became combative with the officers and violently resisted their efforts to place him under arrest," said O'Neill. "During the struggle, an NYPD taser was deployed, hitting the suspect's back. The man pulled out a gun and the officers -- showing no hesitation -- grabbed his hands to direct the muzzle away from everyone."

The suspect fired two shots. One of the officers fired three shots and the suspect was killed.

N.J. Burkett has the latest on the incident that left a police officer wounded and a suspect dead on Staten Island.

Of the five bullets fired, it was not immediately clear which bullet struck the officer.

"It's the type of call NYPD responds to thousands of time a year, but we are reminded once again that no call is routine," said O'Neill.
Watch the Mayor and NYPD's Press Conference Below:


Authorities say Edwards has a criminal record that includes 16 arrests on domestic assault and weapons charges. He served five years in prison for shooting two people in 2004.
The wounded officer was recovering after surgery late Tuesday afternoon at Richmond University Medical Center, and was praised by Mayor Bill de Blasio for her bravery.

"I want to tell you our officer today acted heroically, bravely, professionally. It's extraordinary," said the mayor.

A .9-mm handgun was found under a parked car at the scene.

This is the gun recovered at the scene where a police officer was shot this morning while addressing a domestic violence complaint. pic.twitter.com/zjgZGvYij6