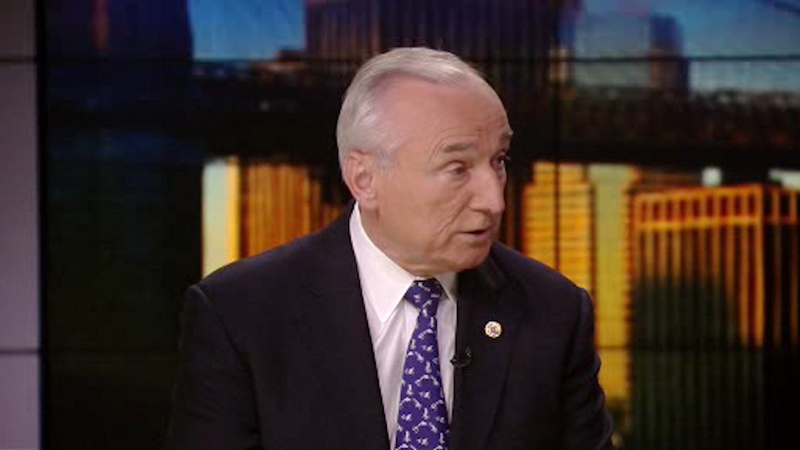 NEW YORK (WABC) -- The terror attacks in Paris have prompted a response from law enforcement agencies at all levels.

Tourist destinations and other attractions across New York City will have a stepped up police presence.

NYPD Commissioner Bill Bratton spoke about what we all can expect as officers try to keep everyone safe.

"There are a number of things we are hoping to get information about. One, were all of these attacks coordinated. By that I mean you had a half dozen things going on, were the participants in communication with each other during the event, or were they operating independently by some central control. Secondly, what was the communication equipment they were using if they were using any during the event, their phones, their apps. You've heard FBI Director Comey talk about the concern of going dark, the ability to encrypt messaging and we are seeing that frequently now, as part of our intelligence gathering capabilities. And that is a question here, because why was there not some indication that an attack was imminent, particularly an attack of this scale and scope," Bratton said.

ISIS has claimed responsibility in the attack, and Police Commissioner Bratton says a major concern is their capabilities on social media, with technology, and their ability to conduct many damaging events in a short amount of time.

"History repeats itself. The events of 9/11 were Al Qaeda which had been operating for a number of years which had declared war on the United States and had brought that war to the United States, the game changer. This is that often used expression again, a game changer for ISIS because their capabilities up until now had largely been focused in Syria with some activity occurring elsewhere. But in the scope of a week you had the bombings in Lebanon, you had the plane takedown which was likely them, and now you have the events of Paris. So they have not only moved into competition with Al Qaeda, but they have surpassed Al Qaeda in their capabilities. One concern would be Al Qaeda feeling that they've been outdone and ramping up their activities, and they have been relatively dormant for a while. So ISIS has turned a relatively significant page in this area. And of great concern is the social media capability of ISIS because they have the ability to inspire through social media, something Al Qaeda was never really able to affect. So there are many new concerns coming out of the Paris event, many of which we have been addressing in New York City, in the United States. But we will look very closely at what happened here because there are lessons to be learned. The suicide bombing aspect, the idea that every one of these people was apparently equipped with a suicide vest that reinforces the idea that if they take hostages, you have to go in because they are going to kill the hostages, that this is not hostage taking for negotiations hostage taking, hostage taking for the effect and murder," Bratton said.

As for the vulnerabilities of ISIS, the police commissioner says that there aren't very many.

"At this point in time their vulnerability is minimal. They have a caliphate that they've been able to create that has been allowed to collectively grow and they have access to money in amounts that Al Qaeda never had, they have taken social media and perfected how to utilize that. They are doing something like 90,000 social media hits every day and it's growing. And the ability now with the assistance, which is unfortunate, the manufacturing of phones and other devices and the creation of apps that allows you to encrypt messages so that we, law enforcement, can't see them. The have so many new elements coming at us so quickly we are moving really very fast to stay ahead of these developments. Fortunately, here in New York City we are blessed that we have extraordinarily large capabilities and we need to. We still remain the number one terrorist target in the world, we believe," Bratton said.

There are many lessons to be learned from the Paris terror attacks, and Bratton says they are taking those to heart and explained how the NYPD operates their counterterrorism efforts.

"In the two years that I have been commissioner they have changed dramatically, in the sense of just watching the growth of ISIS and they came into existence almost coincidental of Mayor de Blasio being elected and my being appointed. We've always been concerned going back to Mumbai of the multiple event issue such as just occurred in Paris, so we have been ramping up our abilities to respond to multiple events at the same time. We have the new almost 500 officer counterterrorism command, we have an 800 officer strategic response group, and we've always had our 700 officers in ESU, we have about 2,000 officers with about 400 on duty at any given time who are all equipped to deal with the events you just saw in Paris, but that's response. Just as essential is the offense. The offense in our case is intelligence, the gathering of intelligence, nobody does it better than the NYPD and our partnership with the FBI. As a matter of fact, this week we celebrate the 35th anniversary of the Joint Terrorism Taskforce, the largest and most effective in our country here in New York. So it's an offense, get the information, get them before they get us, we've been very successful with that. We've thwarted 20 attacks against this city since 9/11, but they are coming at us much more frequently. But at the same time, we have to be prepared to defend for when an attack occurs and one will attack, maybe not in New York maybe elsewhere, but it will happen here and in this case we are going to learn from this event that you don't stand outside just waiting as police, you have to get in, you can't give them more time to kill innocents. You have to get in there as quickly as you can, but now we are up against this concept of people equipped with suicide vests. So we are going to have to train to that. How do we train our personnel when they are taking on somebody with a suicide vest," Bratton said.

There have been many recent arrests in America and in New York City of people that have become radicalized and planned attacks. Bratton points to 20 such thwarted incidents since 9/11 in New York City alone.

"It's interesting because if you look sequentially at all that has occurred in the past year just in New York, people I don't think really pay enough attention to just how active we have been making these arrests with the FBI here in conjunction with other agencies around the country. There has been a steady stream of those arrests being made. And there are constant criticisms of our abilities and that we are being accused by some Muslim groups of spying on them and the one that I basically have to scratch my head at, we got these two young women who have become radicalized and now we are being accused of spying because we put one of our undercovers into contact with her when we picked up on social media that they were trying to learn how to create a bomb. To be criticized of that by the Muslim community, I'm sorry but we are spying in terms of our intelligence gathering on people who are attempting to break the law and they are attempting to break the law in a way that is extraordinarily damaging. They want to murder people. So we are going to be very aggressive in gathering intelligence on those people and getting them before they kill innocents," Bratton said.