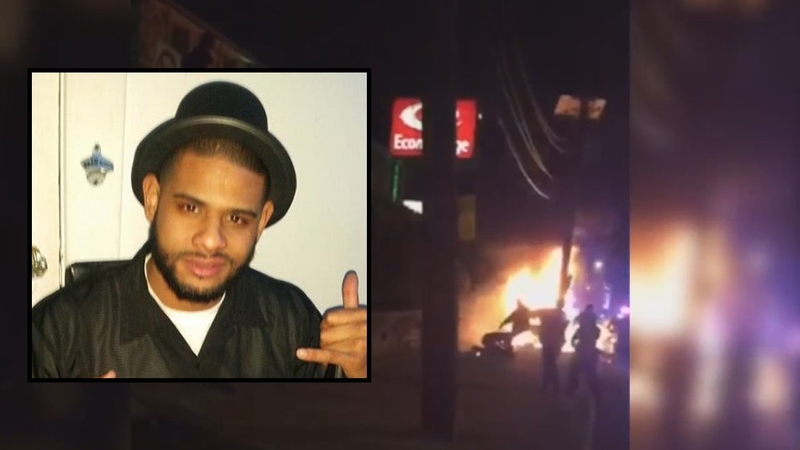 The incident happened just after 11 p.m. as Jersey City police officers tried to stop the driver of a car near Ocean Avenue and Cator Avenue.

During the pursuit, the Hudson County Prosecutor's Office said the fleeing driver was involved in two different crashes. In the first, officers fired shots at the driver as he tried to drive between two lanes of traffic, but they say the driver, 48-year-old Leo Pinkston, kept going.

Several blocks later, on Tonnelle Avenue, the fleeing driver crashed into a utility pole, causing a fire that somehow injured another driver in a different car.

It's apparently this driver, 28-year-old Miguel Feliz, who can be seen in the video (watch the graphic video in the player below). He gets out of his car and is on fire as officers approach him.

In the video, the first officer goes up and kicks Feliz, knocking him down. Another officer appears to kick him as well.

The officers then drag him away from the fire scene, off the sidewalk and into the road. He was eventually hospitalized with severe burns.

"My brother right now is in very bad shape," said Ramon Feliz, the victim's brother. "Thirty percent of his body is burned."

He said his brother, a young father from West New York, was heading home from work and was critically injured.

"OK, anyone can get confused," Ramon said. "But how are you going to tell, the police can't identify who is who."

The witness who recorded the video, Eric Roberto, was unsettled by what he saw.

"Help him out, help him out," you hear him pleading in the video, for cops to help.

"I don't got nothing against the cops, but that wasn't the proper way to treat anybody in that kind of situation," he said.

"Our investigators have reviewed the video and we believe with certainty that this man is the bystander from West New York who suffered burns, not Leo Pinkston, the individual pursued by police," he wrote. "As I previously said, we will utilize all resources available to the Prosecutor's Office for a full and thorough investigation as we seek to bring this matter to a rightful conclusion."

Pinkston was charged with aggravated assault and eluding police. But it appears Miguel was simply in the wrong place at the wrong time.

"He's on fire," Ramon Feliz said. "Do what's possible to help him and then resolve the problem."