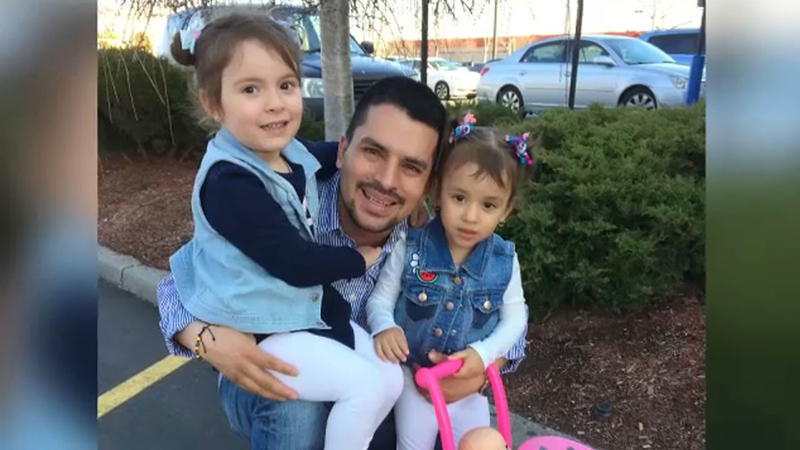 Supporters say 35-year-old Pablo Villavincencio, an undocumented immigrant from Ecuador, was targeted after he delivered a pizza to the Fort Hamilton Army base in Brooklyn last Friday.

His family is desperate for help after he was detained by military police and later turned over to ICE agents. His wife said the hardworking father of two doesn't have a criminal background.

"This is unimaginable what happened," Brooklyn Borough President Eric Adams said Wednesday. "It was alright to take his pizza, but it was also alright for them to put him in prison."

It wasn't the first time Villavincencio delivered a pizza to the Army base. He was asked for ID, but this time was different.

"He came like always, they requested his ID, he showed them the NYC ID, but the officer told him it wasn't enough," Villavincencio's wife Sandra Chica said.

According to Department of Defense protocol, Villavincencio was detained on the Bay Ridge military base until ICE agents arrived.

Adams addressed the concerns of the entire community and demanded Villavincencio's release.

"The arrest of Pablo with a permissible ID is sending shock waves throughout the immigrant community," Adams said. "They were told with this ID, you will have some form of living in this city without the harassment."

Adams said his goal is to reunite Villavincencio with his family and his children.

"He was a taxpayer contributing to our community who entered this base and he went from entering the base that should protect us to prison," Adams said.

Chica said she heard her husband will be deported next week and she will be left alone with her children. She is a U.S. citizen and said his paperwork was still pending when he was detained.

Ecuador native Pablo Villavicencio-Calderon was detained and handed over to ICE when he went to deliver a pizza at Fort Hamilton in BK. His family and @BPEricAdams now demanding his release #ABC7NY pic.twitter.com/Hjmtv95nPe