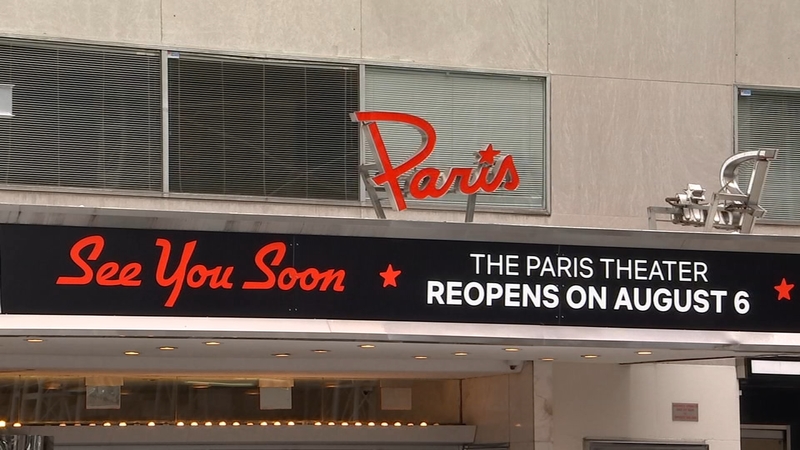 NEW YORK CITY (WABC) -- An iconic movie theater is reopening this week, and the first film to be shown is one of my favorites from last year.

"The Forty-Year-Old Version" is a story of New York City today, which I think is the perfect way to re-introduce a great landmark from yesterday.

The door to the future opens into the past, as the Paris Theater of old is brought back to life -- and now, getting ready for a grand reopening.

Like so many other arts organizations, the Harlem School of the Arts had to go virtual during the pandemic

Netflix is, of course, best known for streaming movies into our homes, so it is ironic that such a company would own a theater so iconic.

"We as a company want to make the best films in the world," Stuber said. "And we want our customers to be able to experience them in whatever way works for them, in whatever place they can see them or make the most of that experience."

In the projection booth of the Paris, a digital machine sits between a pair of units that show 35mm films the old fashion way.

David Schwartz is the manager in charge of film programming.

"We're going to show our new films, but we're also going to show great old movies here," he said. "We want to respect the history of this theater."

For some of us, part of our own history is woven into the fabric there. It is the sense, as Stuber put it, of "infinite possibility. The everlasting nights."

Early in our marriage, my wife and I watched, "Amalie," a movie set in Paris, at the Paris.

It is just one memory among many for me, and for so many other film lovers, like Stuber.

The Purple List takes its name from one of NYU's school colors, and the effort has helped bring much needed diversity to the film industry.

"When I round that corner and I seen that marquee, it is New York," he said. "It says New York. It is everything I love about that city in one corner."

It truly holds such a special place in the hearts of so many New Yorkers, folks like Eyewitness News editor Mike Bencivenga, who did such a great job putting together the video attached to this story.

Bencivenga worked as a doorman at the Paris Theater for five years when he was in college at NYU, and now, it will remain there for generations to come.