Pedicab theft caught on camera on Upper West Side 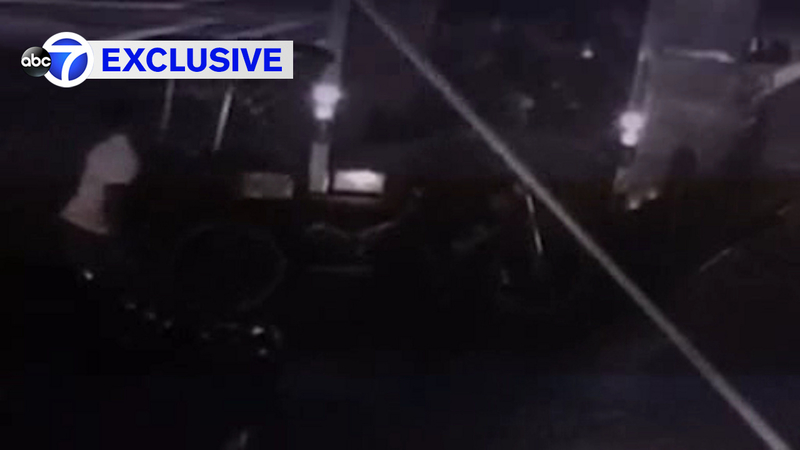 Pedicab stolen on Upper West Side

UPPER WEST SIDE, Manhattan (WABC) -- A valuable pedicab worth thousands of dollars was stolen on the Upper West Side.

Someone made off with the pedal powered taxi after cutting through a chain lock.

"I get to take people around I have the most fun time doing photos and giving people a memory that last a life time," said Madison Reyes, a pedicab driver.

Reyes started doing pedicab tours nine years ago, and what started as a part-time gig has turned into a career he loves.

"I love it because I get to be outside all day. And helping people experience the park in a way that they never would otherwise," Reyes said.

The night after Christmas, a couple of grinches stole his pedicab on the Upper West Side.

Surveillance video captured a Budget rental truck pulling up, and then two men hopping out and getting to work, stuffing the bike in the back.

It happened around 1:30 Tuesday morning.

The bike was parked and locked on 70th and Central Park West.

"It was more than just a bike, this pedicab is my livelihood. I take people around, I do tours of the park, photo books, anniversary, and just because somebody thought that it was a good idea to steal a bike a day after Christmas, I'm out of business. It's a shame," Reyes said.

It's hard if not impossible to make out the license plate number in the video.

The NYPD is working on it.

Reyes says it will cost at least $6,000 to replace the bike.

This is peak season for his business, Madison and Park Tours in Central Park.

The pedicab has a plate and VIN number.

Since it's registered through the Department of Consumer Affairs, it would be hard for someone else to just start using it to give tours.

So Madison is urging the thieves to do the right thing.

"You didn't just steal a bike you stole someone's business. I get up, I go to work, I try to make a living, pay off some student loans and if you could just put it back, I don't want to get anybody into trouble, I just want my bike back so I can get back to work," Reyes said.
Related topics:
upper west sidenew york citytheftpedicabsurveillance video
Copyright © 2022 WABC-TV. All Rights Reserved.
TOP STORIES
2 boys, ages 11 and 13, stabbed in brawl outside NYCHA complex
Woman killed while pushing stroller believed to be targeted: sources
9 people hospitalized with gunshot wounds in Newark
14-year-old tiger dies after contracting COVID-19 at zoo
Victim's sister speaks out on Queens triple murder mystery
Woman, 86, recognized as longest-serving flight attendant
AccuWeather: Very hot and humid
Show More
Cruise ship hits iceberg in Alaska, returns to Seattle for repairs
Bus driver retires after 4-decades with Liberty Lines Transit
Vintage Burger King found behind wall inside Delaware mall
Body of missing man recovered in water near Long Beach
NYC 'Test to Treat' unit improves access to COVID antiviral Paxlovid
More TOP STORIES News