Take a tour of the oldest pet cemetery: It's in Hartsdale 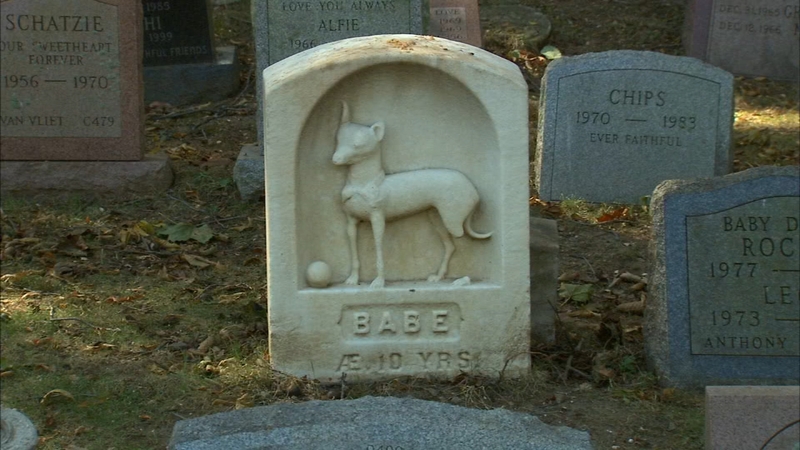 Inside the oldest pet cemetery that's right in New York

HARTSDALE, New York (WABC) -- It's not always something you think about, but just a short drive from Manhattan is Hartsdale Pet Cemetery. It's the oldest pet cemetery in the United States. The first pet was buried on the land in 1896 but it is now the final resting place for more than 80,000 pets.

Ed Martin, whose family owned the site since 1974, says hundreds of pets are buried at the cemetery each year. Many of the pets belonged to famous owners including pop star Mariah Carey who buried her cat in 1997.

Most of the 80,000 remains belong to dogs and cats, but it's also the final resting place for more exotic pets, including a lion cub buried by a Russian Princess in 1912.

The cemetery is also home to the country's first pet mausoleum, a 50-ton granite structure built for two spaniels. The cemetery also houses a War Dog Memorial. It was erected in 1923 after World War I. According the cemetery's website, "it is the first public tribute to honor military canines for their bravery and sacrifice."

Visitors are encouraged to walk around the grounds. Martin says he believes it's less of a somber feel than human cemeteries. He says, "We bury people because we have to. We bury pets because we choose to."

The site also offers other services like cremation, graveside memorials, and even a private viewing room. Martin says the services are important because "many people consider their pets to be like a family member. So our job is to make people feel better in their time of grief."

The first pet was buried on the grounds by New York City veterinarian, Dr. Samuel Johnson. Johnson allowed a grieving client to bury her dog on the grounds of the summer home in 1896. Word spread and by 1914, when the cemetery was officially incorporated, hundreds of pets were buried at the site.

Animals are not alone in the cemetery. Martin says they cremated remains of 600-700 humans are buried alongside their pet.