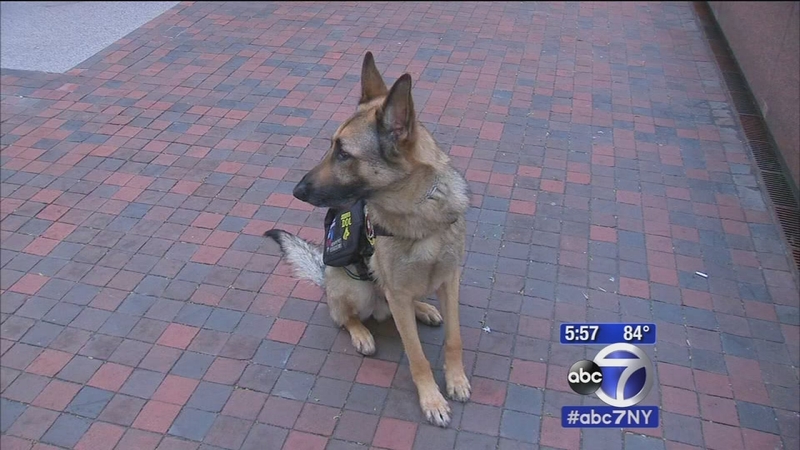 Senator Schumer pushes to get service dogs back home

NEW YORK (WABC) -- U.S. Senator Charles E. Schumer is pushing for a provision that would authorize military dogs to return to the U.S. after their service ends.

Currently, Schumer said Monday, the law does not guarantee military dogs to return home with their military handlers upon retirement, leaving many dogs in limbo, with no real home to go to after their official retirement from military service abroad.

"Those eight months I had with him, when we got back together, couldn't have asked for anything better," said Megan Leavey, a veteran.

Marine Corporal Leavey is thankful she got to care for Rex for the last eight months of his life.

But there were five years wasted; the five that she spent fighting to adopt her military dog when he was ready to retire.

The two had served two dangerous tours together in Iraq.

Surprisingly, Eyewitness News is told the military makes it nearly impossible for veterans to take their service dogs home with them.

The highly trained dogs are apparently considered like weapons, pieces of equipment, so taking them home can turn into a bureaucratic nightmare.

"Right now the military says presumption is for the owner not to get the dog unless they fight, fight, fight to get it," Senator Charles Schumer, (D) New York said.

Sen. Schumer who helped reunite Corporal Leavey with Sgt. Rex is now introducing a bill making it much easier for veterans to adopt their military dogs once the dogs finish their service.

It's a bill supported by the American Humane Association.

"They are too often retired overseas and left on enemy soil," said Barbara McIntosh, of the American Humane Association.

He did not serve with a dog, but is throwing his support behind the adoption bill because his service dog Axel saved his life.

The bill could potentially go to both floors within a month, giving these four-legged soldiers a chance to retire with the vets who loved them.

The provision Schumer is pushing that is currently part of the Senate's National Defense Authorization Act would ensure that veterans and their retired military dogs can remain together.

Schumer explained that if passed, the U.S. Department of Defense of Defense (DOD) would have to alert a military dog's handler about the dog's retirement and begin the process of transferring the dog to the rightful owner at the handler's request.

Schumer said that having both the service member and animal ripped away from one another, when a retiring dog could otherwise return to the U.S. with handler, is a sad situation that must be reversed.