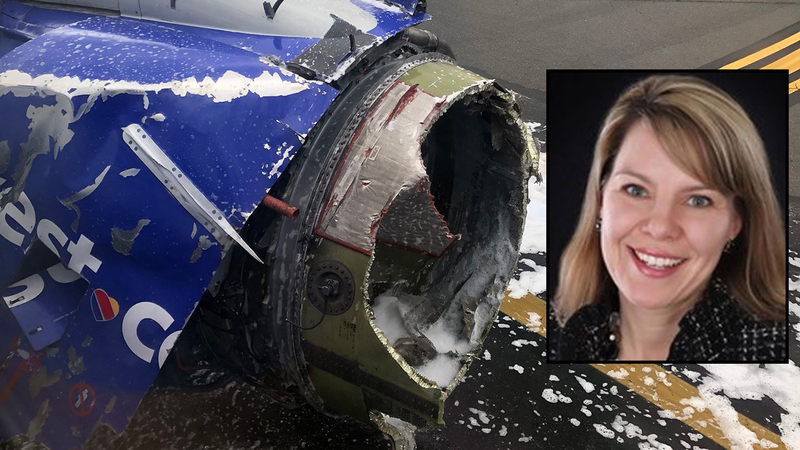 EMBED <>More Videos
PHILADELPHIA, Pennsylvania (WABC) -- One woman died after a Southwest Airlines jet from New York City made an emergency landing at Philadelphia International Airport with part of an engine cover ripped off and a window damaged late Tuesday morning.

Another 12 people were assessed by medics, officials said, and seven of those people were treated for minor injuries. None had to be taken to the hospital.

The victim has been identified as 43-year-old Jennifer Riordan, a bank executive and mother of two from Albuquerque, New Mexico.

The Federal Aviation Administration said Southwest Flight 1380 left LaGuardia Airport in New York City and was en route for Dallas when the jet apparently blew an engine at about 30,000 feet and got hit by shrapnel that smashed a window and damaged the fuselage.

The emergency landing happened around 11 a.m., as passengers breathing through oxygen masks that dropped from the ceiling prayed and braced for impact.

"I just remember holding my husband's hand, and we just prayed and prayed and prayed," said passenger Amanda Bourman, from New York. "And the thoughts that were going through my head of course were about my daughters, just wanting to see them again and give them a big hug so they wouldn't grow up without parents."

Southwest said there were 143 passengers and five crew members on board the Boeing 737.

Eyewitnesses shared video and images during and after Southwest Flight 1380's emergency landing in Philadelphia.

Passenger Marty Martinez did a brief Facebook Live posting while wearing an oxygen mask. He posted, "Something is wrong with our plane! It appears we are going down! Emergency landing!! Southwest flight from NYC to Dallas!!" After the plane landed, he posted photos of a damaged window near the engine.


As panic throughout the cabin spread, attention quickly diverted to row 14 where Jennifer Riordan was reportedly sitting next to a window shattered by an engine blade.

"Stewardesses were right there taking care of her and everything else," said passenger Kathy Farnan. "And they were also taking care of everybody, running around with oxygen, making sure everybody had enough oxygen."

Upon hitting the tarmac first responders rushed to the plane and tended to Riordan who was taken to a nearby hospital. She later died of her injuries.

NTSB investigators confirm an engine failed in mid-air and pieces of debris went flying off with a portion landing some 60 miles away in Bernville, Pennsylvania.

"It's very unusual and so we're taking this event extremely seriously," said Sumwalt. "This should not happen and we want to find out why it happened."

It was the first death stemming from an in-flight accident on a U.S. airliner since 2009, when 49 people on board and one of the ground were killed in the crash of a Continental Express plane near Buffalo.
Former commercial pilot J.P. Tristani said pilots train all the time for engine failure and know how to land if an engine goes out. But it is the uncontained failure that pilots dread most, and it appears that's what happened in this case.

"The problem with any uncontained failure is that you'd be concerned with any of that stuff flying around impacting the control systems," Tristani said. "Either one blade, two, four blades, whatever that engine rotation goes out of balance, and it just disintegrates."

The NTSB is holding back on calling this an uncontained failure, but something from the engine or the engine cover came apart and struck the fuselage. The loss of cabin pressure forced pilots to rapidly descend from 32,000 feet, and although it's still too early to tell what caused the engine failure, Tristani -- who's made some emergency descents during his 40-plus year career -- said he'd be surprised if it were a maintenance issue given Southwest's safety record.

"I know Southwest pilots," he said. "I have never heard of that airline cutting costs on maintenance. They've had problems, yes, but not extraordinary ones."

It is likely that transportation safety investigators will re-examine a 2016 engine failure of an exact model Southwest Airline 737. The plane had to make an emergency landing when one of its engines started breaking apart. It landed safely, its damaged engine looking very similar to the failed engine in Tuesday's incident.