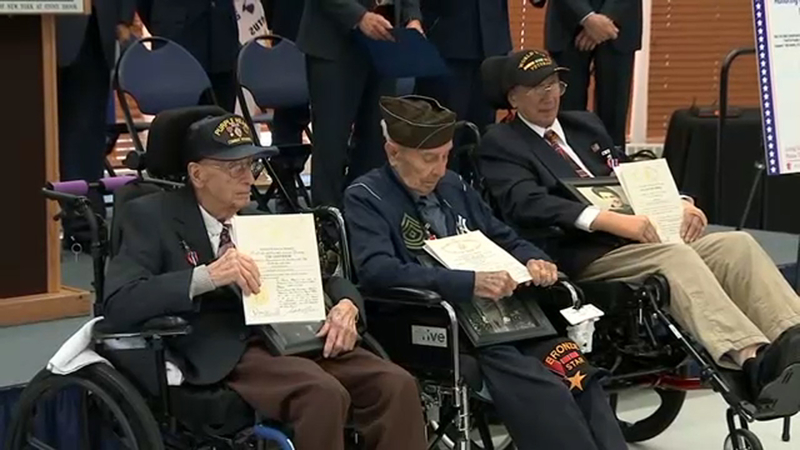 The Long Island State Veterans Home in Stony Brook University is home to three D-Day invasion heroes who were recognized, as well as 100 World War II veterans who each received special awards of recognition and gratitude.

Each of the 100 World War II vets received a Governor's Proclamation commemorating the special day in American history, as well as a letter of gratitude for their service from the director of the New York State Division of Veterans' Services.

"On the 75th Anniversary of D-Day, I want to offer a sincere thank you to all our veterans and their families for their sacrifice and service to protect our freedoms," Cuomo said. "I urge all New Yorkers to join me as we honor the courageous service members who risked everything on D-Day when 160,000 American and allied troops landed on the beaches of Normandy and turned the tide of the war and the course of history forever. For those we lost and the veterans who made it home, thank you. We owe you a debt of gratitude that can never be repaid."

A candle lighting ceremony also honored the 150,000 Allied troops who landed on the beaches of Normandy 75 years ago, all service men and women who served during World War II, the 21.5 million brave men and women who have worn the uniform in defense of freedom, the over 800,000 members of the armed forces that have made the ultimate sacrifice, and the current 1.4 million members of the US Armed Forces who are protecting our freedoms.

Operated under the auspices of Stony Brook Medicine, the Veterans Home remains one of the only nursing homes in the country that is fully integrated into the health and educational mission of an academic medical center.

Since opening its doors in October 1991, the Long Island State Veterans Home has provided care to more than 10,000 of Long Island's veterans.