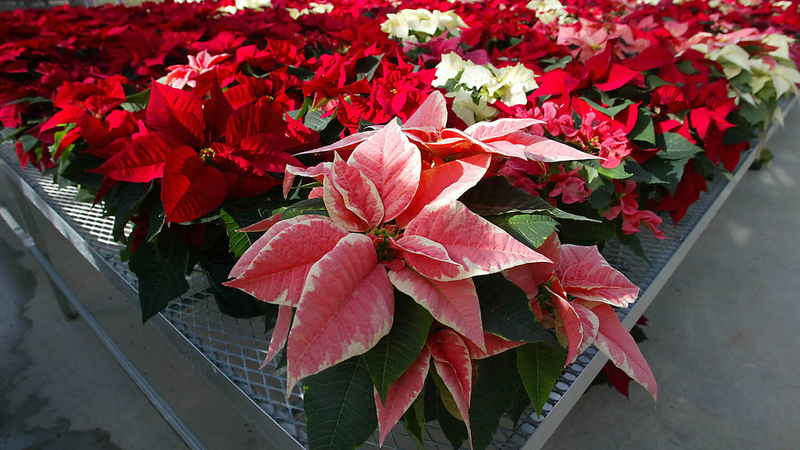 CHICAGO -- Are poinsettias really poisonous? Are snowflakes really pure as the driven snow? Does feasting really put on the pounds? Sure as sugarplums, myths and misconceptions pop up every holiday season. Here's what science says about some of them:

Poinsettias, those showy holiday plants with red and green foliage, are not nearly as harmful as a persistent myth says. Mild rashes from touching the plants or nausea from chewing or eating the leaves may occur but they aren't deadly, for humans or their pets. Poinsettias belong to the same botanical family as rubber plants that produce latex, so some skin rashes occur in people allergic to latex. According to a Western Journal of Emergency Medicine research review, the plants' toxic reputation "stems from a single unconfirmed death of a 2-year-old in Hawaii in 1919."

"In none of those cases were there deaths or serious injury. In fact, more than 95 percent of them required zero medical care," she said.

The anglicized name comes from Joel Poinsett, a 19th century U.S. diplomat who brought the plant back from Mexico.

To form snowflakes, moisture high in the atmosphere is frozen by clinging to particles that may include dust specks or soot. Add germs to that list. University of Florida microbiologist Brent Christner has found that bacteria commonly found on plants are surprisingly abundant ice "nucleators" present in snow from populated areas, barren mountain peaks and even Antarctica.

So is catching snowflakes on your tongue a bad idea?

He said the number of bacteria in snow would probably be about 100-fold less than in the same amount of bottled water.

"There are a lot more things to be worried about in making you sick than ingesting snowflakes," he said.

The same things that can make holidays merry - great expectations and family time - can also be stressful. Holiday blues are a real thing for many people grieving loss or absence of a loved one, and wintertime can trigger true but transient depression in some people, a condition sometimes called seasonal affective disorder. It's linked with lack of sunlight in winter and some scientists think affected people overproduce the sleep-regulating hormone melatonin. Research suggests it affects about 6 percent of the U.S. population and rates are higher in Scandinavia. But contrary to popular belief, suicides peak in springtime, not winter. No one has figured out why.

HAIR OF THE DOG

Forget that bloody mary. If extra shots of bourbon in your eggnog have you feeling lousy the next day, drinking more alcohol - hair of the dog - won't cure you.

Here's what George Koob, director of the National Institute on Alcohol Abuse and Alcoholism, has to say about that:

"You are in a sense self-medicating a mild withdrawal syndrome by drinking more. The problem is that's going to wear off and you're going to have an even worse hangover."

Alcohol is dehydrating so replenishing with lots of water or other non-alcoholic drinks can help relieve the symptoms. But experts emphasize that prevention is the healthiest cure.

Says Koob: "It all boils down to, don't drink too much."

So what about that saying, "hair of the dog?" According to an old folk remedy, a dog bite could be cured by putting the animal's hair in the wound.

Bakers beware: sampling holiday cookie dough, or any raw dough, can make you sick. And recent research says it's not just because dough often contains raw eggs, which may harbor salmonella bacteria. Flour is another culprit. A study published last month in the New England Journal of Medicine details a 2016 E. coli outbreak that hit dozens of people in 24 states that was linked with flour. Some patients had eaten or handled raw dough made with flour contaminated with that bacteria. Authorities recalled 10 million pounds of flour, some of which had been sold to restaurants that allow children to play with raw dough while waiting for their meals. Baking generally kills any bacteria.

A headline on a Food and Drug Administration consumer update sums up the agency's advice: "Raw dough's a raw deal."

The truth about holiday weight gain depends on whether your Champagne glass is half empty or half full. One often-cited study says it's commonly assumed that the average American gains 5 pounds between Thanksgiving and New Year's Day. But the study authors found the average was a little less than 1 pound. Other studies have found it's closer to 2 pounds, still barely enough to make your pants feel tight. An extra piece of pie or one gigantic holiday feast won't doom you, says Indiana University's Vreeman. The problem, she says, is that the extra pound or two at holiday time becomes a pattern year after year and adds up.
Report a correction or typo
Related topics:
societyhealthholidaypoisonweightsnowchristmascookie doughfun stuffsciencealcohol
Copyright © 2021 by The Associated Press. All Rights Reserved.
TOP STORIES
Officials urge riders to stay alert amid rise in NYC subway crime
Should you be concerned over facials recognition cams?
Bicyclist killed after being hit by SUV in NYC
Gabby Petito's parents speak out about Brian Laundrie
'DWTS' recap: 'Grease' Night ends with shocking elimination
NYC commission votes unanimously to move Jefferson statue
Discipline recommended for 65 cops for conduct during NYC BLM protests
Show More
Mom delivers 14 lb. baby after suffering 19 miscarriages
NYC mayoral candidates disagree on vaccine mandates
Trump questioned in lawsuit over 2015 protester crackdown
Arrest made after explosions rock NJ town
AccuWeather: Breezy & mild after chilly start
More TOP STORIES News