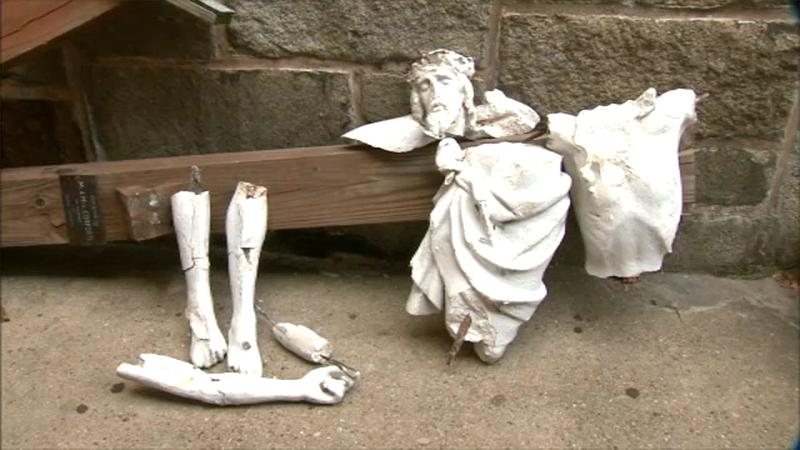 BAYONNE, New Jersey (WABC) -- Police are searching for a man wanted for destroying a crucifix at a church in New Jersey.

The incident occurred Wednesday night around 8:45 p.m. at Saint Vincent de Paul Church in Bayonne, New Jersey, where a man was seen destroying a crucifix bearing a statue of Jesus.

Bayonne Police responded to the scene at 979 Avenue C on a report of a theft and were met by a woman who saw the incident unfold.

According to the woman, the man removed the crucifix from the front lawn of the church and threw it to the ground, causing it to break in half.

The man then reportedly carried the broken crucifix to a nearby wall and began slamming the remaining piece of crucifix against it, causing the attached statue of Jesus to break into numerous pieces. The man proceeded to throw the remaining piece over the wall onto the sidewalk before fleeing the area.

The pastor of the church, Father Sergio Nadres said he did not see the man who vandalized the statue, but was told the suspect was a white or hispanic male about 19 to 25 years old.

"It's a shame you know? That it's happening nowadays especially in this community -- that's a peaceful community. This is a church, it's sacred -- it should be respected," Father Nadres said.

Police say the destroyed crucifix was valued at more than $1,500.