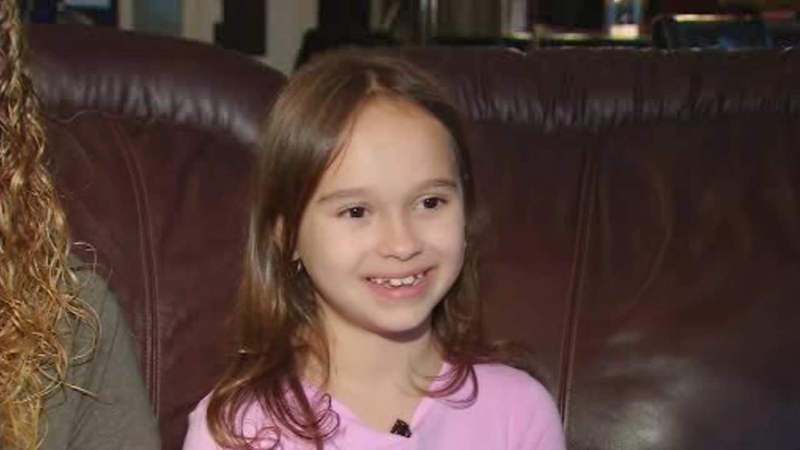 MONROE, New Jersey (WABC) -- A little girl, with the help of her mom, made an incredible gesture to a member of the local police force. What's even more touching is why she feels so connected to the people who protect and serve the community.

It happened one evening with her mom, Mimi, at Villa Borghese Restaurant in Helmetta.

"The police officer came in, I said, 'hello,' we had a little conversation, I whispered to mom to buy his dinner, so we paid for his dinner," Mikala said.

"She's very open to law enforcement, she sees them and her eyes light up and I love that. I want her to be that way," Mimi said.

Mimi is a retired police officer, but there's another reason for this 8-year-old's actions.

Mikala's father, Perth Amboy Police Officer Thomas Raji was hit and killed by a drunk driver in 2008, just a couple months before Mikala was born. He was a regular at Villa Borghese.

"We serviced him for 20 years of his life. He was a very good man," said Giuseppe Russo, restaurant owner.

He was the love of Mimi's life. Now, Mikala's heart is bonded to the men and women in blue.

That's why she bought dinner for Jamesburg Officer Joseph Quinn, whom she'd never met before.

"Because he works hard every day to keep us safe and I love police officers," Mikala said.

What police officer is just going to walk away from that and let it be? Patrolman Joseph Quinn didn't, he couldn't.

After a little detective work, he found his little angel.

"When we found out about that, it just touched us all. She's a wonderful girl with a bright future," said Chief James Craparotta, Jamesburg Police Department.

So now, Jamesburg Police have embraced Mikala and even set up a GoFundMe page for her education. A circle of kindness and respect has formed.

"We asked if she wants to lead our Memorial Day parade and she accepted," Chief Craparotta said.

"She has a big heart. I wasn't surprised by her actions," Mimi said.