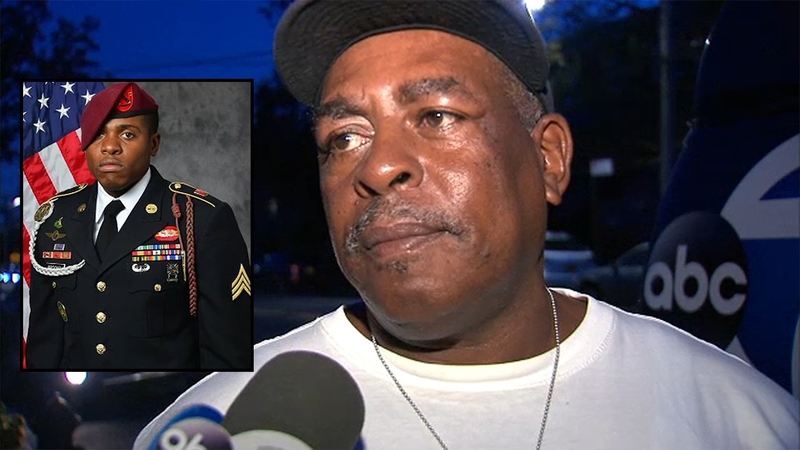 CANARSIE, Brooklyn (WABC) -- First of all, one thing not in dispute is that every president has trouble finding his voice when talking to family of a recently fallen soldier.

But for President Donald Trump, this week started with an inaccurate boast that he's contacted virtually all gold star families on his watch.

Well, he didn't call the Brooks family of Canarsie.

For them, grief has turned to fury.

For Brooks it's really very simple. Still reeling at the loss of his son two months ago, he heard the commander in chief say this, about calls he's made to grieving gold star families like the Brooks.

"I have called, I believe, everybody," President Trump said. "But certainly virtually everybody."

"We didn't get no call from nobody. Never got a call," Brooks said. "I told my daughter to teach me to tweet. I want to tweet this guy. Because he lied. The guy he didn't call us. Never call us. We heard that somebody would call us from the...nobody called."

Not the president, he says, and not anyone from the Trump Administration, in the two months since 30-year-old Army Sergeant Roshain Brooks died fighting ISIS in Iraq, after his own artillery misfired.

"It's not the phone call that family members are looking forward to," Chief of Staff John Kelly said.

At the White House Thursday, Kelly, whose own son died in combat in 2010, made an emotional stab at damage control from the press room. The president under figurative fire for his call to the pregnant widow of Sgt. La David Johnson, when telling her, "He knew what he was signing up for."

The sergeant's mother told The Washington Post, Trump had disrespected her son.

Kelly says he had advised the president to make that point, because it's what worked for him, when he was notified of his own son's death.

But not everyone is the son of a four-star general. Not everyone was born to serve.

In some communities, like in Canarsie, Brooks says some kids really don't have much of a choice, and Kelly's words hurt him even more.

"You know a lot of kids, they leave high school, sit at home, nothing to do, they okay, they see the opportunity," Brooks said. "I don't accept it. No. You know you're not working and you need to have a job, and you go get a job. I wouldn't term it the way he termed it."
Report a correction or typo
Related topics:
politicscanarsiebrooklynnew york citydonald trumpiraqmilitaryarmysoldier killed
Copyright © 2021 WABC-TV. All Rights Reserved.
More Videos
From CNN Newsource affiliates
TOP STORIES