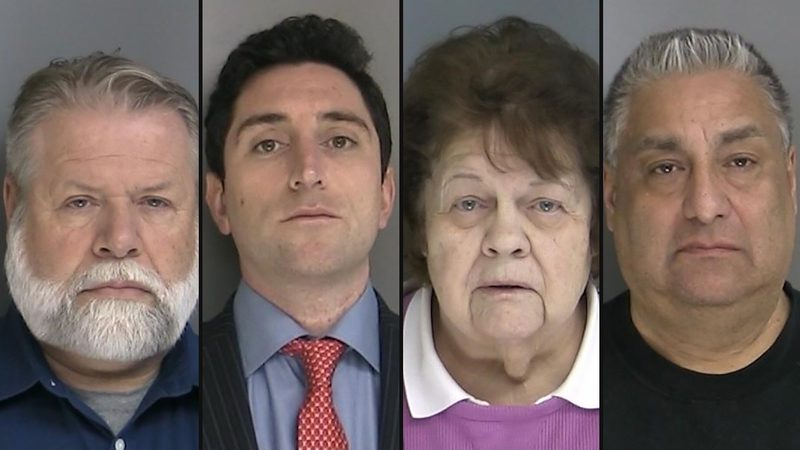 CENTRAL ISLIP, Long Island (WABC) -- Four people, including two members of the Suffolk County Board of Elections and two political party officials, are charged in connection with the alleged forgery of more than 50 signatures on nominating petitions for the 2018 election.

District Attorney Timothy Sini said the investigation revealed evidence of schemes in which the suspects knowingly possessed and submitted nominating petitions containing forged signatures, though it does not appear any of the candidates were aware of or involved in the plot.

"Through their alleged actions, the defendants corrupted the democratic process and violated the public's trust," Sini said. "This brazen scheme to get preferred candidates on the November 2018 ballot by any means necessary included the alleged filing of petitions with forged signatures, some of which included forged signatures of deceased individuals."

Goodman is alleged to have submitted nominating petitions that contained at least 43 forgeries, and he is charged with 10 counts of criminal possession of a forged instrument and 10 counts of offering a false instrument for filing. The petitions were for Green Party judicial candidates, an Independence Party candidate for East Hampton Town Council, and a Republican Party candidate for East Hampton Town Council. In one instance, Goodman allegedly submitted a nominating petition containing the signature of a person who is deceased.

Mansir is alleged to have submitted nominating petitions for an Independence Party candidate for East Hampton Town Council containing eight forged signatures, including one signature of a resident who is deceased. She is charged with four counts of criminal possession of a forged instrument and four counts of offering a false instrument for filing.

Mann is alleged to have submitted nominating petitions for Green Party judicial candidates containing three forged signatures, including one signature of a resident who is deceased, and is charged with criminal possession of a forged instrument and offering a false instrument for filing. He is also charged with official misconduct for allegedly falsely representing to voters that he was working in his official capacity as an employee of the Board of Elections to collect signatures on behalf of the Green Party.

Dickerson is alleged to have submitted two nominating petition forms for Green Party judicial candidates containing two forged signatures, and he is charged with two counts of criminal possession of a forged instrument and two counts of offering a false instrument for filing.

Pauline Salotti is with the Green Party of Suffolk County and told Eyewitness News that they've complained about these types of voting issues in the past, but that Sini was the first to take them seriously.

"We are hoping that this will deter future forgeries," she said. "And we will definitely be following this trial to see what kind of precedence justice will set here."

"It would be inappropriate to comment on what is an active investigation. It is the official policy of the EHTRC to adhere to all laws, rules and regulations. The EHTRC does not condone any conduct that would not be expressly permitted. We would also caution that speculation during this investigation is in of itself counter to all parties involved due process protections."