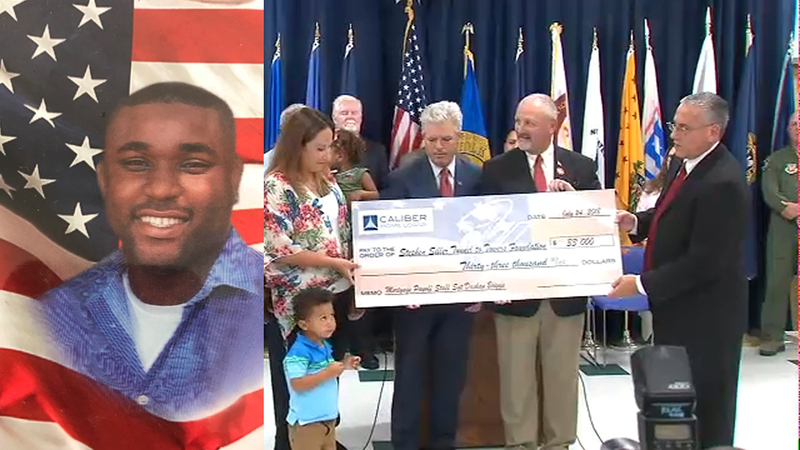 PORT JEFFERSON STATION, Long Island (WABC) -- Take one look at how young his children are, and you begin to get a sense of this family's loss. But Tuesday, the family of fallen Tech Sgt. Dashan Briggs caught a break, thanks to the Stephen Siller Tunnel to Towers Foundation, and donations from others.

The 30-year-old, from Port Jefferson Station, was one of seven airmen killed in a helicopter crash in western Iraq back in March. He was one of four who died from the New York Air National Guard's 106th Rescue Wing out of Westhampton.

But to the grandparents who raised him alongside their own kids, the loss is immeasurable.

"Well he's my son. And, any mother that loses a child..it takes a long time," said Briggs' grandmother Rosemary.

She choked back tears Tuesday, after her grandson's widow, Rebecca, was handed a check from their mortgage company, Caliber Home Loans, for $33,000 to help pay off their mortgage.

It is for the home where the Briggs family hoped to raise their children, now ages one and a half and 3.

Rebecca Briggs said it was significant that they could stay in their home "forever...where our memories were made."

"And I won't have to work multiple jobs. So it's just, I'm forever grateful," she said.

Tunnel to Towers offers financial assistance to veterans and other first responders killed in the line of duty. To date, they have pledged $7 million in the form of trust accounts and mortgage payments.

But the group offers something else, which is priceless.

"We don't just pay off a mortgage and leave. We don't just build a home. You become part of a family," said founder and C.E.O. Frank Siller.