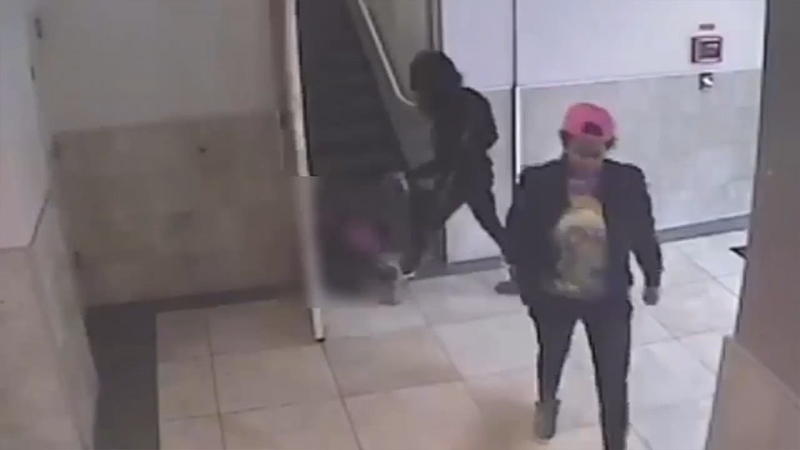 MELROSE, Bronx (WABC) -- A Bronx pregnant mother is speaking out about a brutal beating at the hands of two young women in a stairwell in a Third Avenue apartment building.

"I felt like I was going to die. My body just went numb after a while. I was just waiting for it to be over," says Tylesha Mohammed, the 22-year old mother.

The vicious beating on February 1 was caught on security video and released by NYPD detectives.

Tylesha, seven months pregnant, can be seen being kicked and punched by two young women.

"I just felt like it was never going to end. That's how I honestly felt. And I felt hopeless. I felt like there was nobody there to help me," she said.

Tylesha had been visiting a friend. When she went to leave she encountered a group of young women and men in the lobby of the apartment building.

"Tiffany, the girl in black, she just punched me. All the guys. All the girls began stomping on my head and stuff," she says.

She protected her unborn baby girl as best she could but suffered bruises to her head and face. Her arm is still swollen and she has stitches in her lip.

"When I went to the hospital they don't know how she survived. Her heart beat is really really strong," says Tylesha.

Neighbors in the building were shocked to see the video. "Oh my God! I was not aware of that," says Elia Velazquez. "Very shocking. And it's so embarrassing because it shouldn't happen to a pregnant woman, not anybody," she adds.
"God bless them and I hope they are doing ok," said Victor Maisonet, another resident of the building.

Tylesha says she and the young woman named Tiffany had exchanged words on Facebook but had never met in person.

And why they attacked her? "She says I'm going to beat her up and I'm going to break your face and kill your baby. That's all she just kept saying," says Tylesha.

And as long as the suspects are still free, Tylesha says, "I don't feel safe. I don't. I just want to leave and just get away."

She added that she and her unborn baby girl are fine and that her baby was not harmed.

The pregnant woman was treated and released from the hospital and is doing OK.