Protest outside Trump Tower after SCOTUS pick leads to arrests 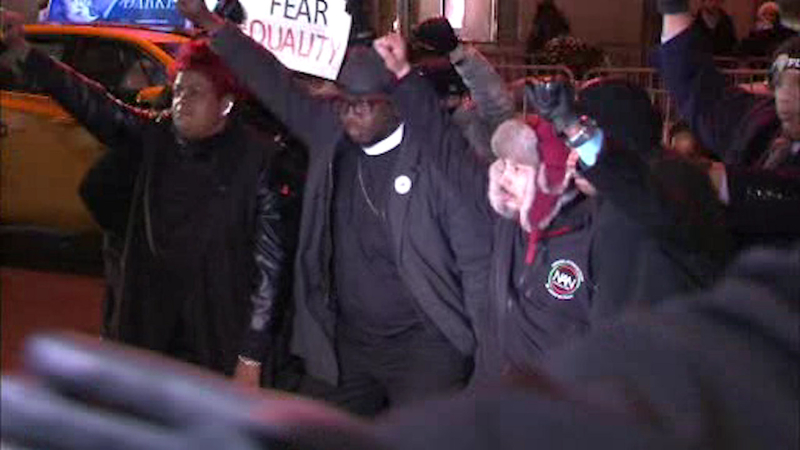 Protesters concerned about what the Supreme Court could do, knelt down on Fifth Avenue in front of Trump Tower again Tuesday night; 11 were arrested.

This protest was over Trump's nomination of Neil Gorsuch, but it started before anyone knew who the actual nominee would be.

"This is really about what America will look like for our children and our grandchildren. This fight for the Supreme Court is about America's future. We've got fights about how America is going to look today, but this is about America's future, and that's why we've drawn the line in the sand here," said Kirsten John Foy, of the National Action Network.

Garner's mother, Gwen Carr; the Rev. Al Sharpton's daughter, Ashley; and several others were issued desk appearance tickets for disorderly conduct. Sharpton is the founder and president of NAN. His daughter is currently the director of the National Action Network's Youth Huddle group.

Carr has been a vocal critic of Trump in the past, and campaigned for Hillary Clinton during the election. Her son died in July 2014 after being placed in a chokehold by a police officer in Staten Island.

"In an act of civil disobedience and in the tradition of Dr. Martin Luther King, Jr., Eric Garner's mom and others were arrested tonight ... over President Trump's SCOTUS nominee Neil Gorsuch," Sharpton's longtime spokeswoman, Rachel Noerdlinger, said in a statement.

There was another protest over the nominee in Brooklyn at Sen. Chuck Schumer's (D-N.Y.) home. There is anger and frustration over a president who has upended the system, precisely as he promised.