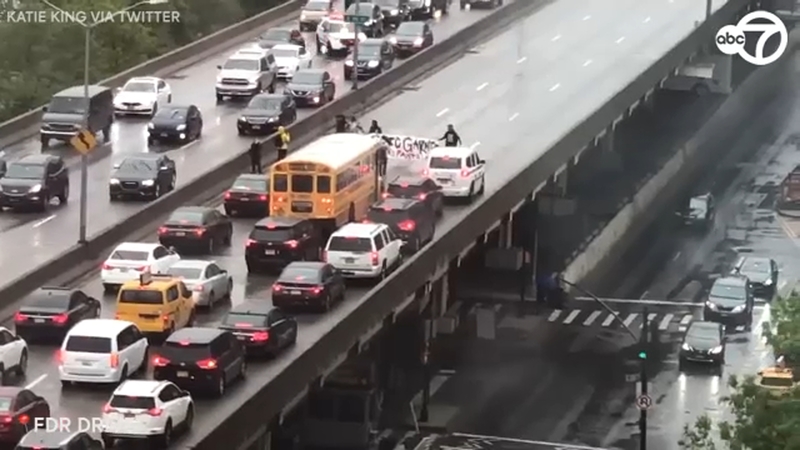 The protest, which included members of the activist group Black Lives Matter Greater New York, began around 9 a.m. Monday. There were no immediate reports of arrests.

Officer Daniel Pantaleo is accused of using a banned chokehold during the incident that led to Garner's death in July 2014.

Garner was the unarmed black man whose pleas of "I can't breathe" became a rallying cry against police brutality.

Pantaleo could face penalties ranging from the loss of vacation days to firing if he's found to have violated department rules. He is not required to be in court as it is a departmental trial, and he denies wrongdoing.

A ruling last week requires that the police watchdog agency bringing the case prove not only that Pantaleo violated department rules, but that his actions fit the criteria for criminal charges. Pantaleo does not actually face criminal charges.

The PBA insists the officer was using a 'seatbelt hold."

Pantaleo has been on desk duty since Garner's death.

"Eric Garner pleads for air and is ignored," attorney Jonathan Fogel said. "Instead of giving aid, this officer buries this man's face in the ground. Moments later, he goes unconscious. And minute later, he died."

The CCRB made it clear that Garner died as a result of a strictly prohibited chokehold.

Panteleo's attorney says he didn't use a chokehold, but another approved technique called the "seatbelt hold," and that his client is being made a scapegoat in a politically charged atmosphere.

Attorney Stuart London said Panteleo feared for his life when he felt Garner was trying to push him toward a plate glass window.

However, London said, it's a misconception that the phrase "I can't breathe" was uttered when the officer's hands were around Garner's neck. It happened, he said, when officers were trying to handcuff Garner.

"We know he wasn't choked out because he is speaking," London said.

Ramsey Orta, a friend of Garner's who shot the video of the confrontation, conceded during cross-examination that Pantaleo's arm wasn't around Garner's neck when he uttered, "I can't breathe."

Garner's sister, Ellisha Garner, left the courtroom wailing as Orta's video played. Gwen Carr also walked out. She had tears streaming down her face as the Rev. Al Sharpton escorted her to the hallway.

Back in the courtroom later, Ellisha looked away and pressed her fingers into her ears to block the sound as the video was played again.

Pantaleo, wearing a gray suit, sat quietly throughout the proceeding.

The Police Union is blaming Garner's death on his poor heath.