Virtually all NYC streets have now been plowed, city says 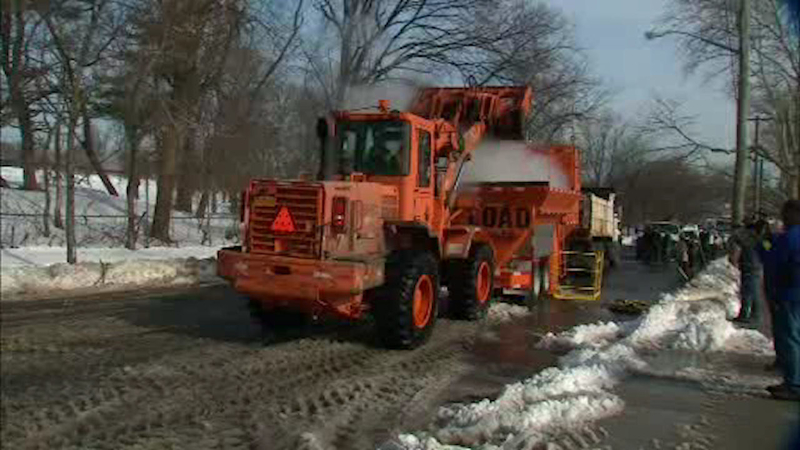 MIDDLE VILLAGE, Queens (WABC) -- An army of sanitation crews has been working around the clock to clear many of the Queens residential streets that remained clogged by Saturday's snow, and the city says virtually all streets have now been plowed.

The Sanitation Department said Tuesday afternoon that 99% of city streets and nearly 100% of Queens streets have been plowed since the storm ended.

The department has been working through streets that need to be re-cleared with plows and spreaders Tuesday.

City Hall explained in parts of Queens, some streets are just too narrow for a plow.

"When we're talking about having to do scoop by scoop on some of these streets with a front end loader it's very slow," said Sanitation Commissioner Kathryn Garcia.

But there is still a lot of anger that so many had to wait so long.

"They should have been better prepared for this, if every borough got cleaned, Manhattan got cleaned! But what about us in Queens," said Woodhaven resident Angelica DiMaria.

"We don't ever forget anybody in different parts of the city, Jackson Heights got 34 inches of snow!", said Garcia.

But even plowed streets remained dangerous. On Tuesday in Woodhaven, at 88th Avenue and 80th Street, a school bus slid into parked cars, disabling that bus and blocking one behind it. No injuries were reported on the bus.

A street nearby was only half plowed because there was another disabled car blocking the route.

There has been plenty of kudos for New York City workers battling to clean up from the second most powerful snowstorm ever. However, there have been pockets that were ignored. Thousands of impassible snow mounds have left many Queens residents still furious.

By now, the Sanitation Department has almost a thousand plows in Queens alone. But many residents still are blaming the city.

"We have a sanitation truck stuck because he tried to go up a hill when they haven't plowed the streets in two days," said Mike Dimambro.

The truck was no match for Middle Village - its narrow streets are encrusted in thick ice. On 75th Street, a car was parked right in its path.

A crowd gathered for nearly two hours as workers managed to get the truck back down the hill where it got stuck again, then a front-end loader had to yank the 20-ton vehicle out of a drift. For the workers, there was coffee and cheers when the big truck was finally cleared.

Conditions on the streets are still a mess in so many spots, and Mayor Bill de Blasio is asking for patience, even though he admits the progress in Queens has been too slow.

De Blasio has not made many friends in Middle Village.

"I would tell him he did a terrible job. Absolutely terrible," says Annie Schrank.

"He made (former New York Mayor John) Lindsay (who served New York during the late 1960s and early 1970s) 19 look like a star! Fuggedaboutit - Lindsay lost the election and everything over snow," adds Al Vitale.

Ghosts of mayors past always loom large over every snowstorm in New York. Thousands of viewers took to Twitter to show us that their streets have not been plowed, some using the hashtag #PLOWQUEENS

3 pm and still not a snow plow in sight queens bayside nyc pic.twitter.com/3xWThuIHm1

Had to go to Queens today. This was one of the streets in Astoria! I hear lots of streets in Bx r similar. @ABC7NY pic.twitter.com/S8zngZmL1N