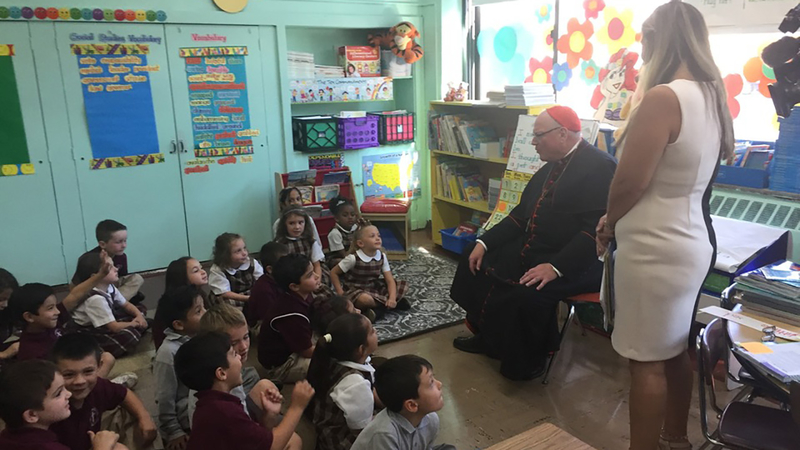 CASTLETON CORNERS, Staten Island (WABC) -- There is a major fundraising effort underway by the Archdiocese of New York, and its success is already being seen at St. Teresa in the Castleton Corners section of Staten Island.

Cardinal Timothy Dolan spent an unusually warm October day in the classroom at St. Teresa Thursday, but it won't be long until the entire school will be air conditioned thanks to the new Archdiocese fundraising effort called "Renew + Rebuild."

St. Teresa was one of a dozen pilot parishes that began the fundraising effort throughout the archdiocese late last year. Parishioners hope to raise $1.2 million over the next five years.

"So far, we have collected over $660,000 that have been donated," parish trustee Anthony DeFazio said.

Each parish set a fundraising goal and identified a capital project that needed improvement. Air conditioning for the school gym and the classroom was selected at St. Teresa.

"Seventy-four cents of every dollar raised stays in the local Catholic community," said Bettina Alonso, executive director of development at the archdiocese. "We all know that the heart of the archdiocese are the parishes."

Parents like Al Peteroy, with two children in the school, favored the fundraising effort.

"We are hoping that this program will save the other schools," he said. "And more children will be getting into the Catholic school."

Two-thirds of the 300 parishes are now beginning the fundraising, with a $200 million goal set for the entire archdiocese.

"We've only got a third of our 300 parishioners done, and we are already over 50 percent of the goal," Cardinal Dolan said.