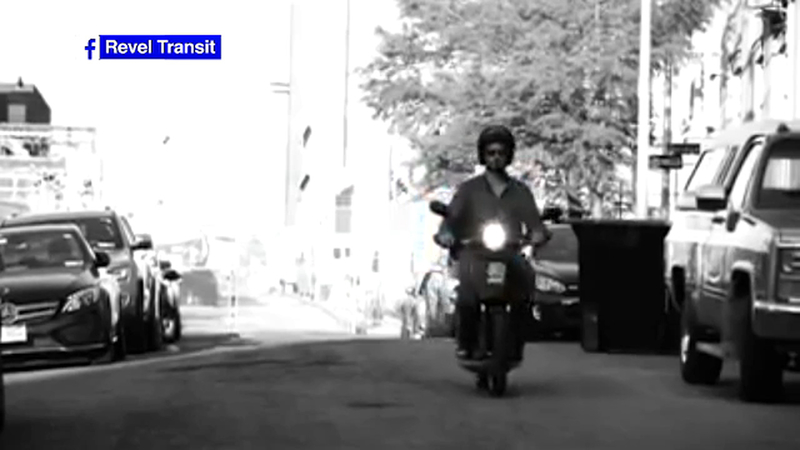 BROOKLYN, New York City (WABC) -- A first-of-its-kind service is coming to New York City, where ride sharing is all the rage.

From ZipCars to CitiBikes to Lyft, there's now another way to get around town without owning a vehicle -- make way for electric mopeds.

The company Revel Transit announced Monday that it plans to launch the first-ever shared electric moped service in the city.

"Shared mobility is the future," Revel CEO and co-founder Frank Reig said. "Our generation isn't going to car dealerships and dropping tens of thousands of dollars to buy a new car. They'd rather hop on a bike, hop on an electric moped, hop in a car they share with the rest of the neighborhood and other residents."

The Bushwick-based company is kicking off the service to the Brooklyn neighborhoods of Bushwick, Greenpoint, and Williamsburg, with the hope of expanding in the future. This type of service is already popular overseas in cities like Berlin and Paris, where thousands of electric mopeds are operating in downtown areas.

The cost is $4 for the first 20 minutes, and 25 cents for each additional driving minute, but only a nickel per minute if the moped is parked. Insurance is included, and the company even provides helmets and a free lesson to those who are new to mopeds.

Revel Transit and local leaders hope that the pilot program will at least put a dent in a few problems plaguing these neighborhoods.

"These communities are most impacted by the pending L Train shutdown and are currently looking for new, innovative, transportation solutions," COO and Revel co-founder Paul Suhey said.

Reserving a moped is easy through the Revel Transit app, though there are some rules to keep in mind though. The mopeds have to stay within Brooklyn and Queens, which means no going over bridges to other boroughs. Also, when finished, the mopeds must be parked legally within designated home areas.

"More than anything, it's good for the environment," New York City Council member Antonio Reynoso said. "The neighborhoods that were mentioned -- Greenpoint, Williamsburg and Bushwick -- have the highest asthma rates in the city of New York."