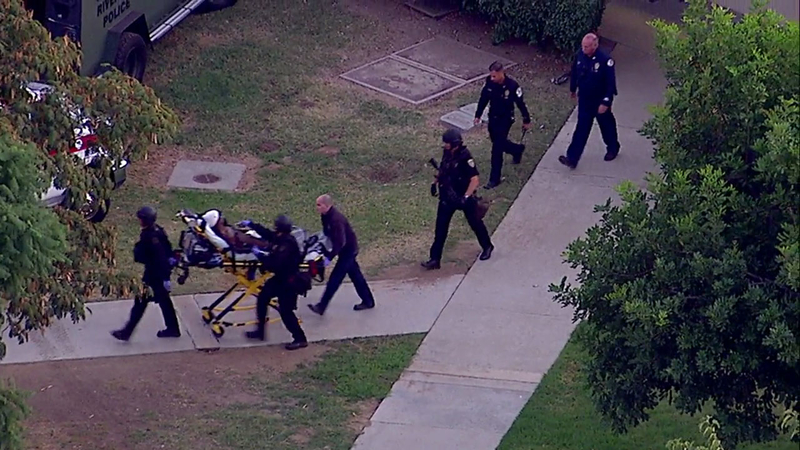 RIVERSIDE, California -- A man who barged into his child's Southern California elementary school and allegedly held a 70-year-old teacher hostage for nearly seven hours was shot by police who forced their way into a classroom and rescued her Tuesday.

Negotiators had been talking to the man but hadn't heard from the woman.

"We, of course, had been fearing for the hostage's life all day," Railsback said, but the decision to hurl distracting flash-bang grenades and storm the classroom was made because "the fear for her safety was increasing."

The children were at lunch and were not in the classroom when the man barricaded himself inside with the teacher, said Justin Grayson, a spokesman for the Riverside Unified School District.

The man was seen being wheeled away on a gurney into an ambulance. There was no immediate word on his condition. The teacher was sent to a hospital for examination but didn't appear to be injured, Railsback said.

It's still not clear what prompted the man to enter the school shortly before 11:15 a.m. and barricade himself with the teacher, and it wasn't immediately known whether he had a weapon although he did bring a backpack onto campus, Railsback said.

The suspect had suffered an "emotional breakdown" that morning, his uncle Carl Jackson told the station.

"He's not dangerous," Jackson said before the standoff ended. "It's just a matter of getting in there and talking to him, because we can talk to him."

Carl Jackson, who identified himself as the barricaded suspect's uncle, said the suspect was not dangerous and that he was experiencing a "breakdown."

The man had barged into the school office, where he failed to sign in, and was later seen grabbing the teacher.

The husband of another teacher was on campus and tried to intervene but the man punched him in the face, knocking him down and breaking his nose, Railsback said.

Madison Barber-Alvarez told KABC-TV that she and her classmates were held in the room for two hours.

A mother and her daughter were reunited as a possible hostage situation continued at Castle View Elementary School in Riverside on Tuesday, Oct. 31, 2017.